At WWDC this year, Apple announced a new "Discovery Mix" playlist that would recommend music and artists to each Apple Music subscriber based on their listening habits and favorite songs. Yesterday, the feature became available to users on the iOS 10 beta, now under a different name: one playlist called "My New Music Mix" and another called "My Favorites Mix" (via AppleInsider). 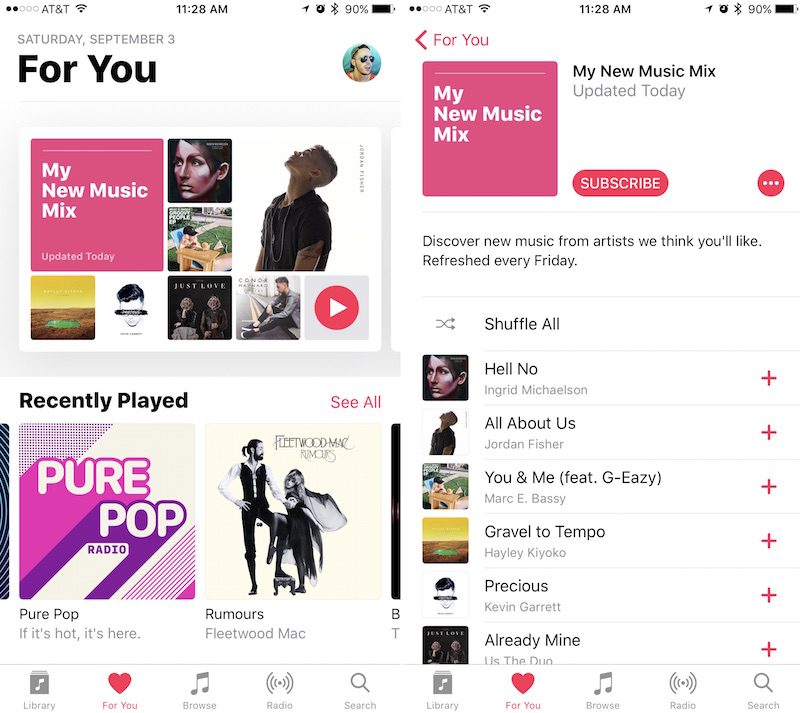 The update can be found in the For You section of Apple Music, with each playlist housing 25 songs. My New Music Mix contains all-new music from artists that the Apple Music curators have picked based on each user's listening habits, and updates with new options every Friday. My Favorites Mix is full of "the songs you love and more," meaning it's focused on music users have already listened to rather than introducing them to new content. That playlist is updated every Wednesday.

Similar to other personally curated playlists in the For You tab, both My New Music Mix and My Favorites Mix can be subscribed to, placing them in the Library tab to become more easily accessible. On a smaller scale, each individual song can be added to the Library, and then downloaded to listen to offline. 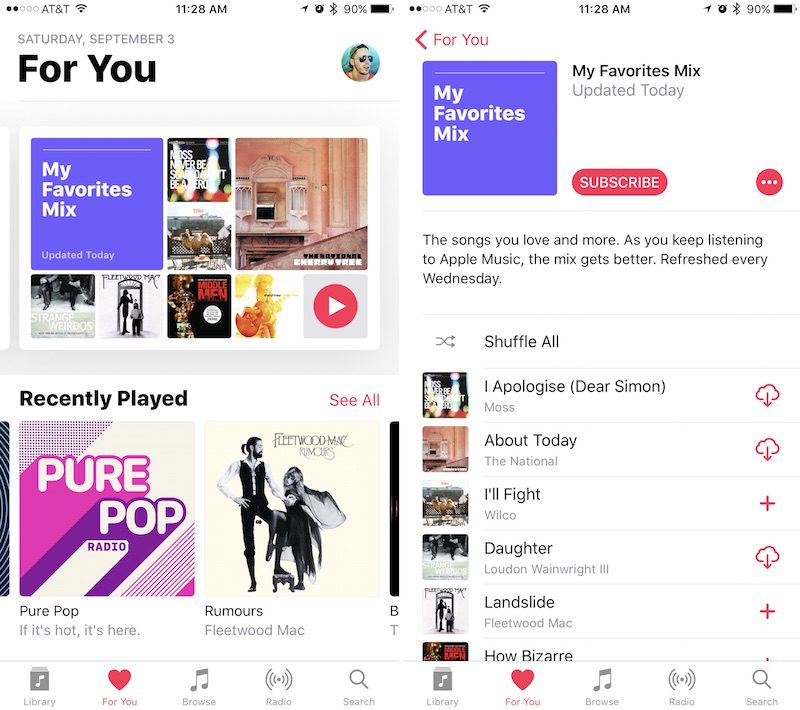 New iOS updates, like Apple Music's personally-tailored music curation playlists, are predicted to be topics of discussion at Apple's September 7 event next week. Otherwise, it's expected that focus will be on the debut of the iPhone 7 and iPhone 7 Plus and Apple Watch 2.

Tuci
I must say it's very accurate. Which a nice surprise.
Rating: 8 Votes

Why did you switch from Spotify in the first place?


At the time Apple was offering a better family plan than Spotty (and in some ways still do, see below.) That along with native support on my iPhone/iPad/Watch/Apple TV/Mac and simpler integration with my existing iTunes library seemed like worth trying for 3 free months. After a few weeks of using AM I couldn't find a good enough reason to switch back to Spotify, so I didn't.

The family plan played a big part though, while Spotifys terms state that family members must reside at the same address as the account holder, Apple don't give a damn so I can share my subscription with more of my family and there's many other benefits to the family plan too. So staying with Apple just made sense.

*edit*
Oh, and I've found the suggested playlists from Apple to be very appealing to my hugely varied musical tastes. Considering I like everything from folk, classical, country, pop, metal, blues and many, many more genres. Apple Music has done a bang up job of supplying me with music I like and most importantly new music I've not heard but also like very much so, yeah, can't actually find a reson to switch to the others. I've been a Spotify, Deezer, Google, Rdio and Napster customer over the years and none of them have gelled with me the way AM has, so I'm a happy punter for a change :D
Rating: 7 Votes

wlossw
It's very good at suggesting the music I hate that my wife plays over and over on my phone in the car... ;) she is very pleased with MY Apple Music custom playlist filled with shania twain and Celine dion.
Rating: 7 Votes

I am to totally falling for Apple Music. This sounds very promising, in my eyes it's what's been missing.

Yeah, they just keep making it better and better. I've never regretted my decision to switch from Spotify to Apple Music.
Rating: 7 Votes

I must say it's very accurate. Which a nice surprise.

I haven't listened to much yet but the first few songs are definitely in the ballpark of my tastes so I'm impressed so far.
Rating: 5 Votes

nathanalf
Yeah, definitely got quite a few songs I like already... Pretty impressed, and this is definitely the best part of the 'updated' Apple Music IMO
Rating: 5 Votes

hauntvictim
I am to totally falling for Apple Music. This sounds very promising, in my eyes it's what's been missing.
Rating: 5 Votes


The key to your post is where you say "Because to me." That is your preference and opinion, just as my preference is to stay with GPM + YouTube Red for the same price. Is it conceivable that my preferences may be different than yours and that I find better value and desirability in GPM vs. AM?

NO!!! Don't be ridiculous, you must like the same as anyone who uses an Apple product. How dare you take the liberty of being a staff member of all things and using a non-Apple product.

What the hell do you think your doing, is this some kind of damn hippy freedom of choice nonsense your trying to pull? Do you have an opinion and mind of your own. What the hell. There's no place for that kind of thing here don't you know who we are, get off my lawn!! Go on, leg it before I set the hounds of Appleville on you.

Honestly, the nerve of some people, come round here telling us they can think for themselves. For gods sake what's the world coming to.

Still not enough to draw me away from Google Play Music and YouTube Red for the same price. But from the sounds of it, the new curated lists are working out well which is a good thing.


Can you tell GPM to play the top hits from 2005, or the latest Arcade Fire album without turning on your iPhone? Or do you use Android? In which case I would understand your preference.

Because to me, all of these services are very similar and the main benefits come from integration with the platform. If Apple opens up Siri to music, that may change, but for now, I see no reason for an Apple user to be using anything else but AM, especially with iOS 10.
Rating: 3 Votes

It's very good at suggesting the music I hate that my wife plays over and over on my phone in the car... ;) she is very pleased with MY Apple Music custom playlist filled with shania twain and Celine dion.


Get yourself a nice new family plan so she can make her own vile playlists and you can be rid of the horror and embarrassment of having such arse gravy on your phone :D
Rating: 3 Votes
[ Read All Comments ]