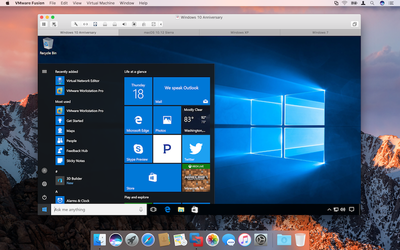 VMware also announced that it's giving away 20 Oculus Rift headsets to the general public. Entrants must tweet (using #FusionLove) a short video of themselves telling a story of how Fusion has helped them accomplished something. Meanwhile, registered attendees of VMworld 2016 will receive 18-months of Fusion or Workstation.

Nice to see I can at least upgrade for free this year with my Fusion Pro v8.

More cynical take: they let go most of the development team, so there aren't big changes coming for a while, if ever.
Score: 6 Votes (Like | Disagree)

More cynical take: they let go most of the development team, so there aren't big changes coming for a while, if ever.

This was posted ('https://communities.vmware.com/message/2584420#2584420') ('https://communities.vmware.com/message/2584420#2584420')by Michael Roy on the VMware communities forum on March 23, 2016 in response to the many questions people have on the future of Fusion. Michael Roy ('http://blogs.vmware.com/teamfusion/author/michaelroy') is the Product Line Marketing Manager for Fusion, Fusion Pro, Workstation Pro and Workstation Player at VMware. He guides product roadmap and messaging, produces and presents technical collateral, and works across teams to refine product integration strategy.

Thanks for the feedback. We hear you.

One thing to note however is that the only team affected was the UI team.

Further, the old UI team is actively transitioning the code knowledge to the new team directly, it's not a matter of 'go read the docs'.

Lastly, many of the key UI developers are still with VMware working on other projects and will be able to share their expertise if the new team requires it in the future.

While we're on the topic... The new team is actually twice as large as the old and more specialized in the areas where we want Fusion to grow. We have gained support for our updated roadmap the past few weeks, and while I can't get into the details yet, we (the product team) are incredibly excited about the direction that we're taking the product in, and that direction is largely drawn with feedback from users like you and everyone else who has chimed in on this thread.

Keep it coming! We're reading everything!

cau
Everything in this post is my own speculation. I have no VMware inside information!

I assume that VMware could not achieve a late summer delivery for whatever they have planned for VMware Fusion 9. Lacking anything to announce that could line up against Parallels 12, VMware chose to take the next point release with whatever bug fixes that their developers have managed to close, ran a round of regression testing against macOS Sierra (host and guest) and Windows 10 Anniversary (guest), called it "Version 8.5" and declared victory.

I wonder when the real VMware Fusion version 9 will be released?
Score: 3 Votes (Like | Disagree)

It was my understand that they laid off the entire team and outsourced them. I'm no longer a fan of Vmware given how all this went down. I'll keep updating my installation, but I'll no longer give them any my money. I know its a literal drop in the bucket but its my money and I'd rather support a company that doesn't have such business practices.