Japanese website Mac Otakara, which previously said Apple would introduce a darker color option to replace Space Gray for the upcoming iPhone 7 series, has shared a photo of an alleged SIM tray for the smartphone that suggests the color will be glossy black like the exterior of the 2013 Mac Pro. 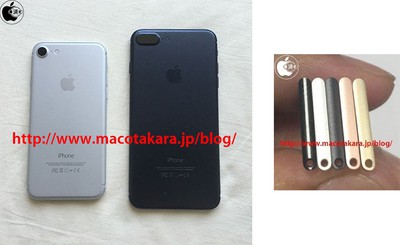 The website now believes the new glossy black option will be part of a five-color lineup, including Gold, Rose Gold, Silver, and Space Gray. It previously said the new color will be a "much darker" variant of Space Gray that is "close to black, though not quite black," and mockups of what an iPhone 7 in that color could look like, including the one above, quickly surfaced around the web.

Apple has announced it will be holding a September 7 media event at 10:00 a.m. Pacific Time, at the Bill Graham Civic Auditorium in San Francisco, where it is expected to announce the iPhone 7 series, Apple Watch 2, and possibly more. Apple will also likely provide an update on the prospective launch dates of iOS 10, macOS Sierra, watchOS 3, and tvOS 10 over the coming weeks.

Dydegu
This is great. They best be bringing that color to the MacBooks!

tmanto02
Awesome! I never liked when they moved away from black to grey phones... looks like I'm one of the few actually excited for the 7!
Score: 13 Votes (Like | Disagree)

Sunny1990
Matt black (or space black) would look much better than this glossy black
Score: 9 Votes (Like | Disagree)

Am I the only one who would prefer going back to only 2 colors choices? iPhone 5 was my favorite..

Yes, you're the only one. Whats wrong with more colour choices?
Score: 8 Votes (Like | Disagree)

Sunday May 9, 2021 2:00 am PDT by Sami Fathi
Zoom, a hallmark platform used by millions during the global health crisis, has been given access to a special iPadOS API that allows the app to use the iPad camera while the app is in use in Split View multitasking mode. This case of special treatment was first brought to attention by app developer Jeremy Provost, who, in a blog post, explains that Zoom uses a special API that allows the...
Read Full Article • 359 comments

Monday May 10, 2021 10:41 am PDT by Juli Clover
Apple's upcoming iPhone 13 models will be slightly thicker than the iPhone 12 models and will also feature larger, thicker camera bumps with lenses that protrude less, according to iPhone 13 schematics seen by MacRumors. The new iPhone 13 and 13 Pro models are expected to feature a thickness of 7.57mm, up from 7.4mm in the iPhone 12 models. That's an increase of 0.17mm, which won't be hugely ...
Read Full Article • 197 comments