Apple's upcoming iPhone 7 is rumored to feature a thinner body with no headphone jack, with Apple instead planning to rely on the Lightning port and Bluetooth as ways to connect headphones to the device.

While traditional Bluetooth headphones, including Apple's own PowerBeats, have a wire that connects the left and right ear pieces to each other, Apple is said to be designing earphones that do not include a connective cord. These earphones would be similar in design to the Bragi Dash, an upcoming set of earphones that features individual ear pieces for each ear. Charging would be done through a battery case. 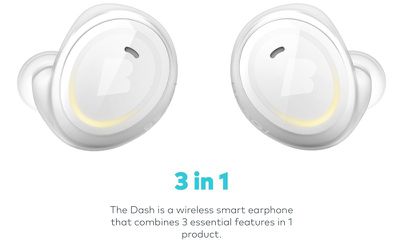 The latest version of the new wireless Apple/Beats headphones in development do not include any ports for charging, in contrast to the mini-USB port on the current wireless Beats. Instead, the new headphones are likely to come with a carrying case that doubles as a rechargeable battery to juice up the headphones when they are not in use.

A recent rumor suggested Apple would use new audio technology in the iPhone 7 to improve noise-cancelation techniques for better sounding music and phone calls, and this appears to be technology that may also extend to Apple's prospective wireless earphones.

In October, trademark filings for an audio accessory by the name of "AirPods" were linked to Apple, so it's possible Apple's rumored wireless earphones will eventually be named "AirPods" and sold alongside the existing EarPods.

Today's report also suggests Apple is finalizing the design for the iPhone 7, testing three designs that range from a thinner model to a device that looks much like the iPhone 6s.

Jimmy James
If this turns out to be the case it's the first decision that's made me think I could look at Android phones.
Score: 42 Votes (Like | Disagree)

If this turns out to be the case it's the first decision that's made me think I could look at Android phones.

Watch all "high-end" Android phones ditch the jack in a couple of years too.
Score: 33 Votes (Like | Disagree)

RDeckard
I'm tired of Apple getting rid of the things I know and love. First it was then command line interface. Then floppy drives. Then DVD drives. Now 3.5mm connectors. I'm going to protest and start listening to music on cassettes (TDK and Maxell, baby!), 8-tracks, and reel-to-reel only. Using 1/4-inch headphone jacks!!! ;)
Score: 31 Votes (Like | Disagree)

Isn’t it amazing how much people are bitching about retiring quite literally 100 year old technology. I mean take a look at photographs from the early 1900s showing people wearing headsets with braided cords plugged into their radio sets. Only back then it was 1/4” jacks instead of 3.5mm jacks. Analog baby!

If this turns out to be the case it's the first decision that's made me think I could look at Android phones.

I agree. If this is the innovation I'm paying premium prices for then I'm not really interested.
Score: 30 Votes (Like | Disagree)

bdkennedy1
Four hours is not acceptable.
Score: 27 Votes (Like | Disagree)
Read All Comments