Apple today made a submission to the Australian Competition & Consumer Commission (ACCC), arguing that Australia's "Big Three" banks' request to collectively negotiate over Apple Pay is ultimately harmful to consumers, would stifle innovation in mobile payments, and would avoid competitive dynamics (via AppleInsider). 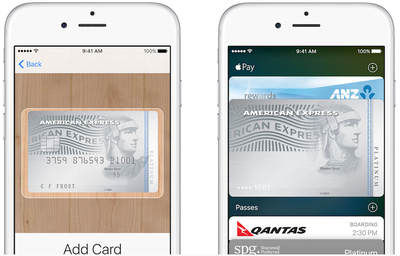 The Cupertino company argues that each of the big three banks (Commonwealth Bank, National Australia Bank (NAB) and Westpac) have resisted "serious engagement" with Apple on Apple Pay for the past two years.

Apple claims that they have tried and failed to negotiate with all of the banks, save for one bank who refuses to sign a confidentiality agreement that would allow Apple to send over its initial terms. Apple says that collective bargaining would slow negotiations further, dragging the collective to the level of the least willing member.

The collective, Apple argues, means that each of the banks has no fear of its competitors offering Apple Pay. Thus, the banks wouldn't fear a potential loss of consumers over the feature. This harms consumers by avoiding competitive dynamics, according to Apple.

The move would also stifle innovation in mobile payments, erasing incentives for existing players in Australia to build on top of or compete with Apple Pay. However, a spokesman for the banks told AppleInsider that they, alongside Australia's merchants and payment processors, have been working on contactless payments before Apple Pay.

The banks say that, unlike Android or Samsung, Apple blocks access to NFC payments and "wants to leave users with no choice but to use Apple Pay." They want to negotiate with Apple to offer other integrated wallets within Apple Pay. Last week, Australia's retailers and payment processors sided with the banks to collectively negotiate.

Apple's submission comes 10 days after the ACCC denied interim approval of the collective negotiations. The banks first issued their joint application in late July. The ACCC will make a final decision in October. Most recently, Australian bank ANZ expanded support for Apple Pay to MasterCard, adding to the already-supported Visa and American Express.

Basically Apple claims that consumers will be harmed until Apple themselves has complete control of all consumers lives....

I'd rather have Apple in charge of my personal life than my bank.
Score: 6 Votes (Like | Disagree)

No, it isn't, which is why several banks have applied for government permission to collectively negotiate.

Banks do not pay a fee for supprting Android Pay (ref WSJ ('http://www.wsj.com/articles/google-loses-key-mobile-payment-feesgoogle-misses-out-on-apples-slice-of-mobile-transactions-1433546638')). Google reportedly tried for one at first, though.

OTOH, Samsung didn't ask for a fee for Samsung Pay. They see it as just another feature to sell phones, not as an external revenue stream like Apple does.

May I kindly ask what your experience with the Australian banking industry is, or is this a vehicle to bash Apple on a subject most people know little to nothing about?

Also, doesn't Samsung and google use your data to target market you, even your payments on their systems? Apple don't do that BTW, but what was the slogan, don't be evil? Just pilfer users data to make billions in advertising at you. Yep, the moral high ground looks rather unstable right there.
[doublepost=1472545115][/doublepost]

so why should apple take those profits? Unlike android or Samsung pay, apple wants to make money out of our transactions.....I will feel some sympathy for apple if they pass on the saving or reduce prices in Oz, though every year my iPhone prices go up and so does apple care....apple is being greedy here and wanting to control its customers

So Apple provide an encrypted secure payment system, first in the world, that not even the banks can provide, and they should do that from the kindness of their heart? Maybe ask the banks to charge no fees at all, then we wouldn't have an issue at all?
Score: 5 Votes (Like | Disagree)

Android and Samsung pay don't take a cut of the interchange fee.

But they will use your data to target market you, making billions off you in the process. Yep, seems legit. Apple are so damn evil.
Score: 5 Votes (Like | Disagree)

developer13245
Wow, read some of the linked history... Apple argued that these three banks "want to maintain complete control over their customers", which should be unacceptable, yet Apple maintains complete control over Apple's customers by not allowing other payment systems on iOS. Apple believes they are the only party that should be allowed this kind of control. The three banks are actually arguing for giving their customers CHOICE of payment systems, not just forcing Apple pay on them. just wow...

Apple already has ANZ on Apple pay in Australia, so competition exists. All three banks should individually refuse to negotiate until Apple opens the NFC platform to other payment systems - this high level demand is general enough and also just plain common sense and does not constitute collusion, so each taking this individual stance would not violate anti-trust laws.

Why doesn't Apple also open the platform to 3rd party apps sold outside their captive app store directly by developers (like OS X currently does)???? How long will Apple get away with "maintaining complete control over their customers" when it involves what apps a iOS device owner can install on their phone? In such an 'open' iOS system, customers could choose to just stick with the Apple App Store instead of buying apps outside - this is called consumer choice.. but Apple only believes arguing "consumer choice" is a tool for getting THEIR control.

...But, Apple's global market share is in a downward trend... so it may not matter... the end is near if they keep clinging to their "world domination" delusion. I'm sick of hearing how Apple claims they're "so good" at solving whatever particular "problem" exists in the world today, yet then using exclusionary tactics that harms competition when implementing their "solution". It is really starting to get old.... NFC pay can be big in the future, yet iOS owners will be forced to use Apple Pay where as other platforms will offer choice of NFC payment systems (Android is planning this).. so in the end, Apple is also harming their own platform. Not smart... because...

Eventually iOS will have the same ~5% market share as Mac.. and it will be Apple's own stingy fault by trying to enforce a closed system.... The end...
Score: 5 Votes (Like | Disagree)

So can someone tell me if android pay takes a cut from transactions, like Apple Pay does?

I'm with ANZ and they've been great in regards to heavily supporting Apple Pay, so I use it regularly. The other 3 banks can go jump. Just watch as more customers switch banks to ANZ because of a service they want.

Sure, Android Pay (Google's mobile pay service) takes a cut as well, but banks have access to NFC hardware on Android phones and can implement it into their own mobile pay apps. Android let's you set the preferred default app for NFC payments
Score: 5 Votes (Like | Disagree)

fermat-au
Both Apple and the banks are acting fairly arrogantly. As many other Australians have pointed out in in other thread about this, in Australia we have had NFC card for awhile now. In the US NFC payments are new, so for many people ApplePay will be their first experience of NFC payment. In Australia the whole NFC infrastructure existed pre ApplePay and worked well. Apple then comes to Australia and arrogantly expects to be able implement ApplePay here, the way they did in he US with a similar cut for them. I think Apple almost see themselves as a saviour, bringing a great NFC payment system to consumers and merchants. Australia has far less need for a revolutionary NFC payment system than the US.

If I were running one the big banks, I would run a high profile campaign that you can pay with you Android phone.
Score: 4 Votes (Like | Disagree)
Read All Comments