The assumed names of this year's iPhone lineup -- "iPhone 7" and "iPhone 7 Plus" -- have been confirmed by "reliable sources" speaking with Japanese site Mac Otakara. The sources said that Apple is following this name scheme to avoid confusion of having back-to-back iPhones with "S" in the name, even though the iPhone 7 will largely be a minor update over the iPhone 6s.

The new report nixes the chance for an additional third tier "iPhone 7 Pro," which was a rumored dual-lens alternative to the single-lens "iPhone 7 Plus" early in the rumor cycle. The less-powerful camera option was said to be created by Apple as a fallback in case the dual-lens technology didn't pan out. Now that everything seems to be going well for the company in this area, and mockups have repeatedly shown a dual-lens camera enclosure, it makes sense for Apple to revert to the well-known "Plus" moniker for its next-generation 5.5-inch dual-lens iPhone, and drop any reference to "Pro" altogether. 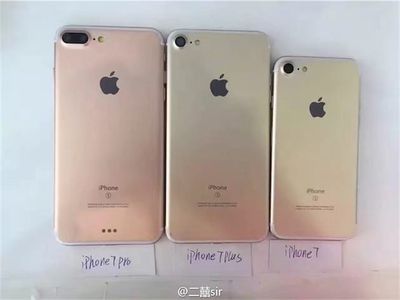 Otherwise, Mac Otakara reiterates on the expected rumors of the iPhone 7: there won't be a 3.5 mm headphone jack, it will house an A10 chip, and it will introduce a new flush, capacitive Home Button in lieu of the traditional physical switch. That last aspect of the new iPhone has been a bit more up in the air in the weeks ahead of the September launch, since it's hard to fully decipher whether recent image mockups confirm one way or the other if the Home Button is pressure-sensitive or not.

It's believed that the iPhone 7 and iPhone 7 Plus will be revealed at an Apple event on September 7, with pre-orders beginning two days later on September 9. A recent leak from AT&T has pushed back the reported launch of the new iPhone, however, suggesting that Apple could be preparing a wide release on September 23, although the original rumor of September 16 is also still a viable option.

Domen151
Thats good. 'Pro' iPhone seems like just an excuse for Apple to increase the price by 100$.
Score: 22 Votes (Like | Disagree)

LordQ
Honestly, this crap does not deserve the new number.

Funny the box for my iPad says "iPad Pro" and my MacBook actually says "MacBook Pro". I think you Need to check the Apple website to see what they sell since that are several "Pro" products.

I think what he meant was that the products are not "Pro", even their name says Pro. He wants a "Pro" device to be more customizable, more high end hardware and so on.
Score: 16 Votes (Like | Disagree)

Even the name is boring.

Apple is boring... is like going to the same club but with different management.

I remember ages ago. A friend of mine had a recording studio, full of people, making a load of money. He was moving and he sold the studio to some guys, some idiots who believe they would be making the same money.

Within a week of being sold the studio was empty. After a month even the receptionist left.

You can have all the technology but you need the genius behind.

Apple has been surviving because of marketing techniques and stock movements like dividing each share into 7. And yes, the apps and the iPhone. But you can go so far. Resizing and making thinner... can go so far.
Score: 13 Votes (Like | Disagree)

thekeyring
This won't end "iPhone 7 Pro" rumours any faster than leaked parts stopped 1080p claiming "There is no 5.5 inch iPhone".

Yes, I have a long memory.
Score: 12 Votes (Like | Disagree)
Read All Comments