FutureBrand recently released the results of a survey that questioned 3,000 consumers about the 100 biggest companies in the world, asking them to score each company on 18 different factors like trust, innovation, individuality, and price premium. The 2016 results crowned Apple as the top company in the world, "in terms of perception strength, rather than financial strength" (via CNET). 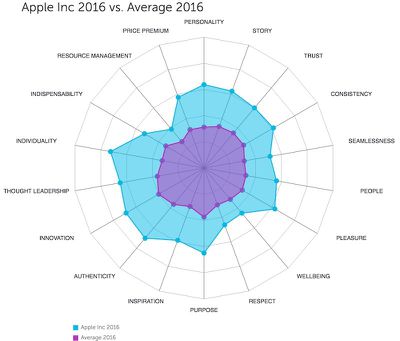 Some of the highest marks Apple received this year surrounded its individuality, authenticity, and purpose, while it scored less well in resource management, wellbeing, and respect among the consumers surveyed. Compared to the second-place entry in the Top 100 listing, Microsoft, Apple edges out ever so slightly in personality and consistency, while customers questioned believed Microsoft to be more innovative than Apple.

Technology companies occupy the top two spots in this year’s rankings and enjoy strong perceptions across our measures. Six of the twenty four ‘future brands’ are in the technology sector – one fewer than in 2015.

A ‘future brand’ is a brand that is more likely to succeed in the future, not just one that is strong now. This is because it perfectly balances strong perceptions of its purpose in the world with the experience it delivers.

Apple's 2016 win comes after it lost the top spot to Google last year, but a bit of behind-the-scenes reorganization seems to be the reason for the search engine company's egress from FutureBrand's list this year. Since Google is considered wholly part of parent company Alphabet, only the latter could appear as a contender for Apple's first place spot. But consumer knowledge -- or lack thereof -- surrounding Alphabet and its relationship with Google most likely led to Alphabet's 21st place ranking.

You can look over FutureBrand's 2016 rankings here.

In all fairness man, Samsung is a great company that makes a lot more than the typically hated (on this forum at least) smartphone...
Score: 9 Votes (Like | Disagree)

In all fairness man, Samsung is a great company that makes a lot more than the typically hated (on this forum at least) smartphone...

Samsung is a great company in the same sense the Medellin Cartel was.

Samsung is run by a chaebol (family group) that has a striking track record of criminal acts, including intimidations to journalists. They basically own South Korea, and Samsung president managed to avoid jail only thanks to a direct intervention of the government, in exchange for favors related to the Olympic Games.

Since the inception, their strategy was to rip off what's working in the market. BlackBerry is on top? Here's the BlackJack. Motorola RAZR? Here's our clamshell. iPhone? Take the galaxy series.

But crime pays, and the company is actually very profitable (and their semiconductor branch is really pushing the envelope).
Score: 6 Votes (Like | Disagree)

Would you trade market share with profit share? In what economic universe? Can you envision the kind of market share that Apple could achieve by dramatically reducing their margins?

In other words: Apple is the clear market share leader, by leaps and bounds, in the market segments they choose to compete in (i.e. premium smartphones, premium PCs, premium smartwatches).
Score: 3 Votes (Like | Disagree)

r00fus
I'm no Google fan, but how can it be that Google is nowhere on the top10 on this list?
That just seems ridiculous.
Score: 3 Votes (Like | Disagree)
Read All Comments