Apple's Dedication to Accessibility Highlighted by Story of Blind Engineer

Mashable today shared the inspiring story of Jordyn Castor, the 22-year-old Apple engineer who has been blind since birth and now plays a central role in improving the company's Accessibility features.

Castor was born 15 weeks early and weighed just under two pounds – small enough to be held in the palm of her grandfather's hand. She defied doctor's predictions and survived those first weeks, and has gone from strength to strength ever since. 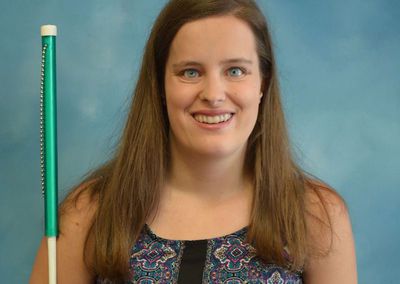 Apple engineer Jordyn Castor works on Accessibility features for the blind (Image: Apple)
A former college student at Michigan State University, tech-savvy Castor was introduced to Apple at a Minneapolis job fair in 2015, a gathering she attended nervously knowing that representatives of the Cupertino company would be there.

Castor told Apple reps how amazed she was by the iPad she had received on her 17th birthday. "Everything just worked and was accessible just right out of the box," she said. "That was something I had never experienced before."

Her passion made an immediate impression, and she was hired as an intern, with her work focusing on VoiceOver support. At the end of her internship, she won a position as an engineer on Apple's accessibility design and quality team.

Castor has since been a driving force behind accessibility, in particular on Apple's Swift Playgrounds, an introduction-to-coding program geared toward kids. She's been working to make the program accessible to blind children, who have been waiting a long time for the tool, she told Mashable.

"I would constantly get Facebook messages from so many parents of blind children, saying, 'My child wants to code so badly. Do you know of a way that they can do that?'" Castor explained. "Now, when it's released, I can say, 'Absolutely, absolutely they can start coding.'"

Sarah Herrlinger is Apple's senior manager for global accessibility policy and initiatives, and said that a notable part of the company's steps toward accessibility is its dedication to making inclusivity features standard, not specialized.

"[These features] show up on your device, regardless of if you are someone who needs them," she said. "By being built-in, they are also free. Historically, for the blind and visually impaired community, there are additional things you have to buy or things that you have to do to be able to use technology."

Apple's belief in continually improving accessibility has not gone unnoticed. On July 4, the company received the American Council of the Blind's Robert S. Bray Award for continued dedication to inclusion-based innovation for blind users.

For more on how Apple's work is benefitting the blind and low vision community, including advances coming with watchOS 3 and the continuing importance of Braille displays, be sure to check out the original article here.

Radin.Y
She was my student at MSU. Quite a brilliant girl. It was my pleasure to teach her. She insipid me everyday.
Score: 24 Votes (Like | Disagree)

keysofanxiety
With the assistive technology sector in general, companies charge an absolute fortune for the most basic VI applications. We're talking thousands of pounds just for an application that utilise AT features in Windows like Magnifier — and goodness help you if you upgrade to Windows 10. The application won't even install, and you'll have to pay through the nose to get an upgrade code. If they were really concerned about disabled people using computers, they wouldn't heartlessly hose their pockets at every opportunity.

Whereas Apple say that everybody should have the right to fully use a computer out of the box, no matter who you are. Can't give enough credit to them when it comes to this.
Score: 23 Votes (Like | Disagree)

No it doesn't make me rethink it at all. Propping up a person like this is a good puff PR piece. The woman is terrific and Apple is not. Apple doesn't give a .... about folks unless they can use it for PR spin or possibly some $$$ and that wont change under the modern market scheme.

Could you be any more disrespectful of this woman? Did it ever dawn on you that she worked her way to where she is and is more than a prop? Apple has been pushing accessibility for the disabled far longer than anyone else. Shame on you.
Score: 19 Votes (Like | Disagree)

"[These features] show up on your device, regardless of if you are someone who needs them," she said. "By being built-in, they are also free. Historically, for the blind and visually impaired community, there are additional things you have to buy or things that you have to do to be able to use technology."

Some of them are so useful even I use them and I have no handicaps. (*knock on wood*)
I think it's great that they pretty much hover between enabling people and enriching the UX for others.
Some don't need or want any and that's cool, but I love that these features are normalized - really just another setting.

It's nice to know that whenever I may NEED them not to enrich my UX, but to be able to use my devices I won't need jack to get started.
A very comforting feeling, considering how ubiquitous and necessary technology is today.

We take our health and well-being for granted, but it really doesn't hurt to reflect how volatile everything is once in a while.

springsup
This is the stuff I wish other companies would copy.

It's not just about making a fancy-looking toy.
Score: 15 Votes (Like | Disagree)

EricTheHalfBee
Didn't take long for the aholes to show up. Not even past page 1 of comments.
Score: 10 Votes (Like | Disagree)
Read All Comments