There are several new features available in Photoshop CC, including Content-Aware Crop, Face-Aware Liquify, and Match Font, plus a new workspace for selections and masking. Content-Aware Crop intelligently fills in the open areas when a canvas is expanded or rotated beyond the original image size, allowing for more options when editing an image to get the perfect crop or angle. 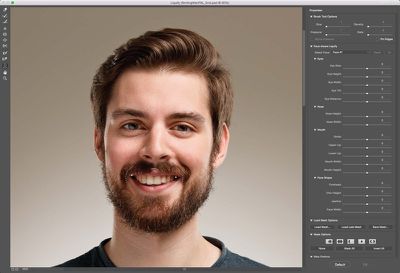 Face-Aware Liquify automatically recognizes the different elements of a face when using the liquify tool, giving users direct control over facial features like eyes, nose, and mouth for making quick artistic changes. Match Font, the final major new feature in Photoshop CC, analyzes an image to determine what font was used, bringing it up in Photoshop if it's already installed and locating it in TypeKit if it isn't previously owned.

Adobe Premiere CC includes new workflows for editing immersive VR and 360 video experiences with a "field of view" mode for working with spherical stitched video. It offers options for dynamically switching between monoscopic, stereoscopic, and anaglyph frame layouts, and there's a new workflow for editing while video and audio are still importing in the background.

Adobe Stock is now able to integrate with Creative Cloud applications through a new One-Click Workflow that allows users to choose an image or video from the Adobe Stock website and open it in an app with a single click. There's also a one-click licensing feature to purchase images directly within Photoshop, Illustrator, and InDesign.

Adobe is debuting a Premium Collection for Adobe Stock, featuring close to 100,000 high-quality images from artists and photographers, and beginning in July, Creative Cloud customers will be able to upload their own images to Adobe Stock.

Across all of Adobe's Creative Cloud, there are new read-only libraries so Creative Cloud Libraries can be shared with team members for viewing purposes without giving all users the option of changing or deleting content, and all nearly apps have gained dozens of minor tweaks, bug fixes, and feature improvements.

"We have two key goals with this release: saving our customers time and helping them jumpstart their creative engines," said Bryan Lamkin, executive vice president and general manager, Digital Media at Adobe. "Every creative project starts with a blank page and ends with a vision coming to life. Today's release of Creative Cloud will help make that journey as fast and productive as possible. From deeper integration of Adobe Stock into the CC experience, to amazing new features like Content-Aware Crop in Adobe Photoshop, this release will expedite the creative process for millions of our customers."

Some of these features were previously announced by Adobe on the Adobe blog and at the National Association of Broadcasters (NAB) show, but they're launching as part of today's Creative Cloud update and should be available shortly.

Adobe offers full Creative Cloud subscriptions for $49.99 per month, and those who have not subscribed can sign up for a 30-day free trial. Adobe also offers a $9.99 photography plan with access to Lightroom and Photoshop.

AdeFowler
I must get 2 emails a week plugging Adobe Stock. I refuse to give them more cash than I already do.
Score: 4 Votes (Like | Disagree)

I must get 2 emails a week plugging Adobe Stock. I refuse to give them more cash than I already do.

Indeed, they've really been pushing it of late. Cheeky buggers!

Can't believe we're at 14 posts and someone hasn't started bitching about the subscription model. Has everyone gone off on their holidays already!? :p
Score: 3 Votes (Like | Disagree)

Hope none of these improvements are as bad for teams as the cloud libraries that default to sucking all vector smart objects into a cloud library unless you uncheck a checkbox on import so you are always missing assets when picking up other peoples work. We really, really, enjoyed that one the other week.
Score: 3 Votes (Like | Disagree)

I still have to teach Photoshop at work. I really wish the powers that be would ditch it for Affinity Photo, which is now my preferred image editing app. The PS interface seems so tedious and backwards compared with Affinity. And my workplace is always having network issues, so using CC should be an adventure. :rolleyes:

You're not alone. I'm looking out for Affinity as well.
Hopefully in years to come, Affinity will be a solid contender against Adobe suite.
Score: 2 Votes (Like | Disagree)
Read All Comments

Thursday September 29, 2022 12:38 pm PDT by Juli Clover
Tony Blevins, Apple's vice president of procurement, is set to depart the company after he made a crude comment about his profession in a recent TikTok video, reports Bloomberg. Blevins was in a video by TikTok creator Daniel Mac, who was doing a series on the jobs of people he spotted with expensive cars. After seeing Blevins in an expensive Mercedes-Benz SLR McLaren, Mac asked Blevins what ...
Read Full Article • 749 comments

Friday September 30, 2022 12:51 pm PDT by Juli Clover
Apple CEO Tim Cook has been touring Europe this week, sitting down for interviews with various media publications. Augmented reality has been a running theme in Cook's discussions, and it is a topic he brought up again in an interview with Dutch publication Bright, which is part of RTL News. "I think AR is a profound technology that will affect everything," Cook said, echoing comments from...
Read Full Article • 317 comments