Adobe has announced major updates to Premiere Pro CC and its other video apps, with VR workflows spearheading a new focus on immersive VR and 360 video experiences.

Set for an "early summer" release, the CC platform updates bring new VR capabilities to Adobe's flagship video editor, in the form of a "field of view" mode that allows editors to work with imported spherical stitched video and see what a viewer would see when looking in a given direction. 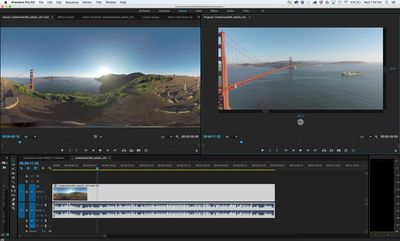 The new mode will allow users to dynamically switch between monoscopic, stereoscopic and anaglyph frame layouts, freely reposition the viewing angle across 360 degrees while editing, and export video with VR tags so that video players like YouTube automatically recognize it.

Adobe also announced a new workflow that enables editors to begin editing during "ingest" while importing video and audio in the background, as well as new proxy workflows for working with high resolution formats including 8K, HDR and HFR media.

Many other apps in Adobe's Creative Cloud suite are also set to benefit from the new release. Other feature highlights coming to Adobe CC include:

After Effects CC: The motion graphics and special effects editor is being given a new audio and video preview engine for smoother playback for cached frames, new GPU-accelerated Gaussian Blur and Lumetri Color effects for faster rendering, and new 3D media export options.

Adobe Stock CC: Tighter integration with Adobe's suite of apps and a new filtered and tagged search system for quick access to over 50 million images and video clips from within Premiere Pro and After Effects.

The new features were announced by Adobe ahead of the National Association of Broadcasters (NAB) Show next week, where it will be previewing the updates to Creative Cloud, which are expected to be made available to subscribers in the coming months.

Adobe offers subscriptions to Creative Cloud for $49.99 a month, while non-subscribers have the option of a free 30-day trial. More information about Adobe video apps and Creative Cloud is available on Adobe's website.

Lemon Mac
I am sticking with CS5.5 until they introduce the new feature of non subscription purchase option for the Suite.
Score: 13 Votes (Like | Disagree)

Mums
I love Illustrator but I'm getting SO sick of Adobe.
Score: 12 Votes (Like | Disagree)

That day is long gone - you're either in with the subscription or you're out.

I'm out. CS6 until the Affinity suite matures enough to jump ship.
Score: 11 Votes (Like | Disagree)

I am sticking with CS5.5 until they introduce the new feature of non subscription purchase option for the Suite.

That day is long gone - you're either in with the subscription or you're out.
Score: 11 Votes (Like | Disagree)

jonnysods
Hey sweet, I should pay them a monthly fee for their software. Not.
Score: 9 Votes (Like | Disagree)

Because of their terrible business model.
Score: 8 Votes (Like | Disagree)
Read All Comments