Staff who sign up to the voluntary AppleSeed program are set to receive pre-release versions of macOS Sierra to install on their personal computers for use on their own time. 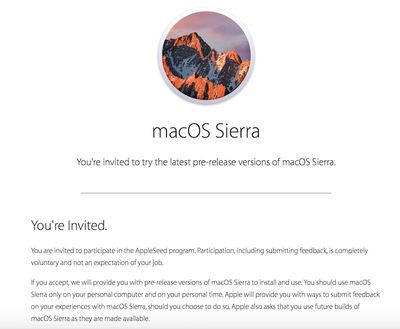 Apple is hoping that staff who get involved will help the company assess how the OS stands up in typical everyday usage scenarios, as outlined in its AppleSeed participation guidelines:

We ask that you use seeded software in your day-to-day activities, which is an environment that cannot be replicated at Apple. We will provide you with a variety of tools that will allow you to give us detailed information about your experience, should you decide to provide feedback to us.

As usual, the AppleSeed program is subject to a strict confidentiality agreement that prevents employees from publicly discussing their involvement in testing the seed.

Apple has invited retail employees to try pre-release software for the past few years, such as the company's Photos app, which replaced iPhoto and was released last year for OS X.

macOS Sierra was announced on Monday at WWDC 2016, and became available to developers for testing immediately after the company's keynote. Apple says a public beta will be launched in July, while the final public release is coming in the fall.

The macOS name, which does away with Apple's long-standing OS X naming scheme, also brings the name of the Mac operating system in line with iOS, watchOS, and tvOS.

Amiga OS was faster, and I'm running a 12-core.

And why does "an entirely new file system" fill me and millions of others with dread?

Where the hell are you talking about?
Score: 2 Votes (Like | Disagree)

And why does "an entirely new file system" fill me and millions of others with dread?

Why indeed? I for one heartily welcome this.
Score: 2 Votes (Like | Disagree)

Can't tell if you are serious. Those employees don't get paid to beta test and have to do it on their own free time.

Came here expecting someone to comment about lack of pay, was not disappointed.
[doublepost=1466107316][/doublepost]

Yes. They are expected to beta test software on their private, personal equipment in their spare private time. You know, a company with that crap load of money in their bank accounts should at least have the decency to let their employees beta test the new product during work hours on company equipment.

There are a lot of other things that the company could do, but they all have in common that Apple should be generous to its employees, not the other way around.

Should have quoted this one. Better whine factor.
Score: 1 Votes (Like | Disagree)

Shirasaki
I believe even Apple allows everyone to test macOS Sierra, there will still be critical bugs (breaks something, kernel panic etc) out there when it is released at Fall.
Score: 1 Votes (Like | Disagree)

Can't tell if you are serious. Those employees don't get paid to beta test and have to do it on their own free time.


Side note last I checked unless you're an actual person working for Apple on the software/hardware R & D itself most people ARE NOT Paid to beta test. It may suck but it is what it is
[doublepost=1466157187][/doublepost]

Yes. They are expected to beta test software on their private, personal equipment in their spare private time. You know, a company with that crap load of money in their bank accounts should at least have the decency to let their employees beta test the new product during work hours on company equipment.

There are a lot of other things that the company could do, but they all have in common that Apple should be generous to its employees, not the other way around.

Wow does everyone here automatically assume every comment is 100% serious?

Do we need to insert </s> as if we were formatting or something?

I'll agree it does suck for the employees in those regards.

Some people might see it as lucky ONLY in the sense that they get a 1st look at a new product. Seriously tho hoping that anyone else thinking of quoting this and spazzing out can calm their titties :rolleyes:
Score: 1 Votes (Like | Disagree)
Read All Comments