Apple is actively looking for retail employees that are "passionate photography enthusiasts" to test the upcoming Photos app for OS X, reports 9to5Mac. 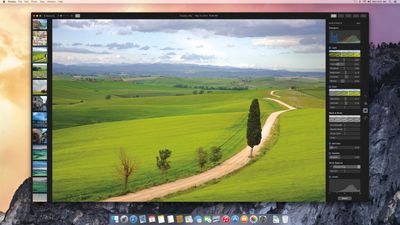 We are seeking a technical and passionate photography enthusiast to join our Quality Assurance team working on Photos for OS X. You will be part of a fast moving team of specialists tasked with delivering the next generation of photography tools for Apple.

Photos for OS X was briefly introduced at WWDC 2014, as Apple will launch the software early next year. It was also reported last month that the new Photos app will be replacing Apple's existing iPhoto and Aperture programs. Apple revealed that Photos would feature a number of professional-grade features, including image search, editing, effects, and support for third-party extensions.

Apple has invited retail employees to try pre-release software for the past few years. Last year, the company offered beta access to OS X Mavericks and iWork for iCloud last year, which followed access to OS X Mountain Lion in 2012.

alvindarkness
Why not search for a few photography professionals to test the app and provide feedback as well. No offense to the enthusiasts that may work at Apple retail stores.
Score: 17 Votes (Like | Disagree)

iRalph
Really looking forward to the Photos app on OS X.. I never saw much sense into having iPhoto on iOS without it having a sync functionality with the OS X version.
Score: 13 Votes (Like | Disagree)

CmdrLaForge
While Aperture is still under the highest grossing apps on the AppStore... :(
Score: 8 Votes (Like | Disagree)

Why not search for a few photography professionals to test the app and provide feedback as well. No offense to the enthusiasts that may work at Apple retail stores.

What makes you think they aren't? They'd be under a non-disclosure agreement, so we won't know til it is released and they start blogging about it or post reviews. Very early days, it wouldn't be feature-complete, and if history is a guide, version 1.0 won't be either, but the features that are ready should work well. Even so, I'll watch keenly and can't wait to play with it, but will wait switching until I read actual user reports of any issues with existing iPhoto/Aperture libraries, inc all existing edits and books/slideshows.

Maybe this is the writing on the wall. Apple throws professionals under the truck. The type of person Apple are targeting are enthusiasts who are not advanced enough to be a paid-Pro, but the sort of person who likes photography but has a different day job. That tells you where the app is headed, i.e. not a replacement for Aperture.

A bit harsh without knowing what they're planning; all we have is a screenshot, a demo of the iOS version, WWDC videos of PhotoKit, and a statement that the existing Aperture libraries will import complete. The screenshot shows most of the sliders we have in Aperture now, what it doesn't show is the library management, book and slideshows, but then it is just one screenshot. The WWDC workshop video shows Apple takes photography very seriously, a lot of the power of Aperture will instead be in PhotoKit and CoreImage including lens profiles, advanced noise reduction, and 3rd party non-destructive editing plugging straight into the system Raw converter. Not only Photos, but 3rd party apps can take advantage of it, and extend Photos.app's capabilities via plugins that won't require a round trip into another format and another program, but done internally and non-destructively, all synced across devices like iPads. If they can deliver on a fraction of this for Version 1.0, I don't care if they call it Pro or Prosumer.
Score: 7 Votes (Like | Disagree)

Why not search for a few photography professionals to test the app and provide feedback as well. No offense to the enthusiasts that may work at Apple retail stores.


Maybe this is the writing on the wall. Apple throws professionals under the truck. The type of person Apple are targeting are enthusiasts who are not advanced enough to be a paid-Pro, but the sort of person who likes photography but has a different day job. That tells you where the app is headed, i.e. not a replacement for Aperture.
Score: 7 Votes (Like | Disagree)

cambox
All answers been clarified. They are looking for enthusiasts. Not quite what I bought a Mac for Apple. Sad
Score: 7 Votes (Like | Disagree)
Read All Comments