Apple this week previewed watchOS 3, the next major version of its Apple Watch software platform. The first beta has been seeded to registered developers, allowing for early adopters to take a closer look at what's new in the update.

Many tidbits in the new watchOS have already been discovered that were not given much or any stage time during Apple's WWDC 2016 keynote, including improvements to the Apple Watch companion app on iPhone, new first-party apps and watch faces, minor user interface tweaks, and more. 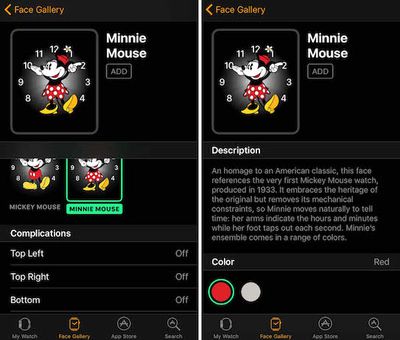 A new Face Gallery section has been added to the companion Watch app on iPhone, allowing users to browse and switch between watch faces, customize the color scheme, and configure complications.

Apple has added a new X-Large watch face with one large complication positioned at the center of the screen.

Apple Watch screenshots can now be enabled or disabled using the companion Watch app on iPhone. The toggle switch is in the General menu.

• More watch faces support complications
• New stock apps: Breathe, Home, Find My Friends, Reminders, and Heart Rate
• Delete most first-party apps by first deleting the app on iPhone
• Tap on the Mickey/Minnie Mouse watch faces and they will read the time in their voices
• Enable auto pausing of indoor and outdoor runs
• Dismissing a notification now returns you to watch face rather than Notification Center
• The new Activity watch face is available in both analog and digital formats
• Siri has a slightly tweaked user interface
• Activity and Workout apps have been redesigned
• Friends view has been removed in favor of the new Dock feature

Share your own tidbits in our Apple Watch: All The Little Things discussion thread.

watchOS 3 will be available as a free software update for all Apple Watch users this fall.

These Disney faces are really awful...

Until Apple opens up Face customization and creation to 3rd party devs, my interest in this Apple Watch remains right around zero.

Not holding my breath on this one :)

AlphaTeam
Thankfully I won't be getting random screenshot of my watch because I bent my hand the wrong way.
Score: 13 Votes (Like | Disagree)

jacobh101
I don't get the fascination with Mickey Mouse?! #smh
Score: 12 Votes (Like | Disagree)

tgwaste
So here we are on watchos3 and the watch STILL cant tell you if you left your phone behind. Seriously, is that a complex piece of code? Doesnt seem like it.

Yes, I know there are (unreliable) 3rd party apps.
Score: 12 Votes (Like | Disagree)

NufSaid
I think that this is now a mature OS.

Looking forward to getting a version 2 watch when it comes out.
Score: 11 Votes (Like | Disagree)