Apple today announced iOS 10, the next major version of its iPhone, iPad, and iPod touch software platform. The update is available in beta for Apple developers starting today, allowing early adopters to update and take a closer look at what's new. A public beta will be available in July, followed by an official launch in the fall.

iOS 10 includes a number of changes that Apple neglected to mention in greater detail on stage during its WWDC 2016 keynote, including a new Wake Alarm in the Clock app, individualized read receipts, a new option in the Music app to optimize storage, and many other features outlined below. 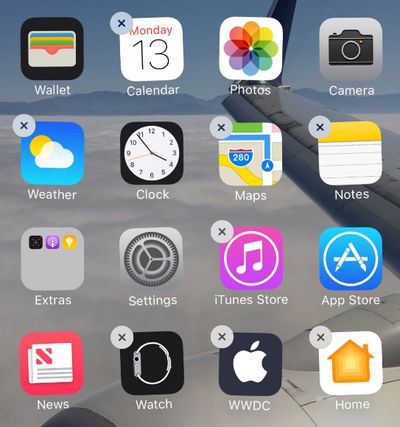 iOS 10 enables users to remove the following built-in apps from the Home screen on iPhone, iPad, or iPod touch:

The apps are now available as standalone downloads on the App Store, meaning that Apple can issue updates for each app independent of iOS updates.

A new Bedtime tab has been added to the Clock app with a Wake Alarm function that can help you go to sleep and wake up at the same time every day. When enabled, the recurring wake-up alarm will remind you when it is time to sleep, track how many hours you slept, and provide detailed sleep analysis.

Read receipts can be toggled on a per-person or per-conversation basis on iOS 10, rather than be simply turned on or off entirely.

Other tidbits can be found in our iOS 10: All The Little Things and iOS 10 beta 1 discussion threads.
[ 233 comments ]

Andres Cantu
Game Center has been removed!?! Whatever will gamers do now? ;)
Score: 22 Votes (Like | Disagree)

Sorry if this has already been asked; if you remove the maps app and have Google maps installed, will this essentially make google maps the default mapping app?

If so, will this also let us use Google maps in CarPlay?

Unfortunately, it will still try to open the Apple Maps app and prompt you to re-download it. I'm hoping they'll let you set default apps in the future.

Another note, when I re-downloaded the Apple Maps app from the AppStore, it was instant. This leads me to believe that you don't actually delete the apps, just hide them. It was seriously instant; I tapped the cloud-like download button, and the 'open' button instantly appeared.

UPDATE: I can confirm that the app isn't actually deleted and is instead hidden. You can test this yourself by having the Maps AppStore page open, delete the Maps app, go back to the AppStore page and see the cloud-like download icon, turn on airplane mode, still able to download the app instantly

DevNull0
So instead of realizing that in 2016 flash memory is insanely cheap, Apple adds a "feature" to automatically delete stuff you haven't used in a while.
Score: 17 Votes (Like | Disagree)
Read All Comments