Expectation that Apple is set to announce Siri for the Mac at WWDC 2016 has intensified over the weekend, thanks to an apparently unprompted reference to OS X leaked by none other than the personal assistant on iPhone.

Asking Siri the oddly worded question, "Open settings in the window" simply opens the iOS Settings app. But the same question with the word 'Siri' included at the beginning of the sentence evokes the spoken response: "It doesn't look like you have an app named 'Finder'." 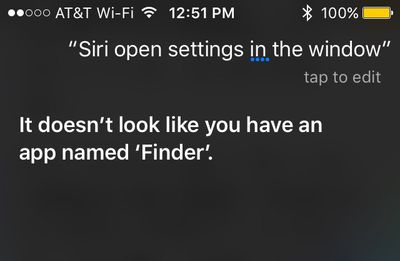 Screenshot via AppleInsider
'Finder' appears to be a reference to the OS X file manager application, since no such app of that name exists for iOS. The discovery was revealed in a blog post by Brian Roemmele, and suggests that Apple's servers are already being modified behind the scenes to extend Siri's functionality to the Mac.

Screenshots passed to MacRumors indicate that Siri will soon become a defining aspect of the Mac desktop, ready to answer many of the same queries and perform many of the same tasks it can on iOS devices – opening apps, conducting web searches, controlling HomeKit, sending text messages, reading emails, setting calendar events, and more.

Additionally, Apple is also said to be preparing to release a Siri software development kit so that developers can make their apps and app content accessible through Siri voice commands, marking a much-awaited extension of the assistant's capabilities.

Apple's Worldwide Developers Conference kicks off tomorrow with a keynote event at 10:00 a.m. Pacific Time, where Apple is expected to show off the latest version of OS X alongside updated versions of its iOS, tvOS, and watchOS operating systems.

Subscribe to the MacRumors YouTube channel for more videos.
Apple will offer a live stream of the keynote event through its website and through a dedicated events app on the Apple TV. MacRumors will also provide live coverage, on MacRumors.com and on the MacRumorsLive Twitter account.

Meanwhile, you can learn more about what to expect at WWDC 2016 in our comprehensive features and rumors compilation.

Update: Siri also now appears to be hinting at another OS X feature that doesn't currently exist in iOS: asking the personal assistant to "turn on dark mode" results in the response, "Sorry, but I'm not able to change that setting."

Brad9893
Or, perhaps it means that they are bringing the Finder to iOS so we can finally access the file system. I'd really like that.
Score: 60 Votes (Like | Disagree)

Why do people want to browse the file system on their iOS device anyway?

People want to be able to manage their files if they'd like to, not manage the file system. Think a more powerful version of the iCloud Drive App :)
[doublepost=1465729732][/doublepost]

Its not pointless if people just want to manage their work files better. The majority don't 'access to the file system' e.g. root file access, just a space to store and sort documents easily.
Score: 26 Votes (Like | Disagree)

Tamagotchi
If they give me a file browser I'll be the happiest person on earth (that and dark mode pls!)
Score: 20 Votes (Like | Disagree)

LCPepper
She doesn't seem to be saying that anymore!

I think Apple has gagged her.
Score: 16 Votes (Like | Disagree)

sshambles
What if macOS is replacing OSX...

but OSX is replacing iOS... 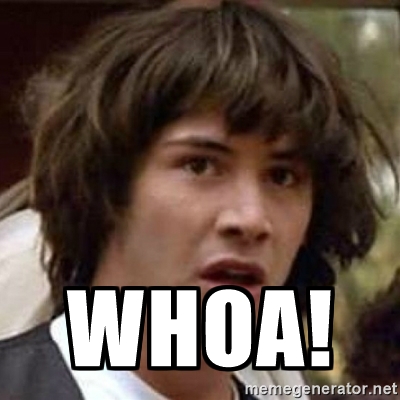