After a few weeks of news surrounding Nintendo's continued push into smartphone gaming, the company's first app -- Miitomo -- slowly started to disappear from the conversation as users began to abandon the app. Nintendo celebrated an impressive 10 million user downloads a few weeks after Miitomo's release, but since then little news or talk has been circling from Nintendo itself or the game's original downloaders. 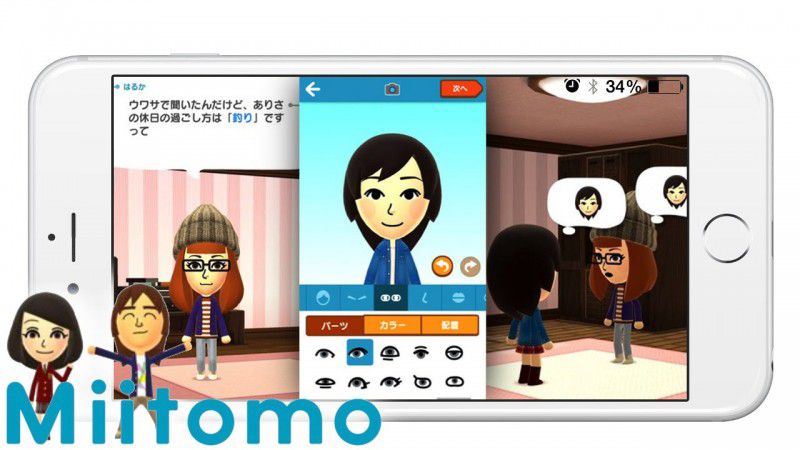 A new report by SurveyMonkey attempts to drill down to the reasoning behind Miitomo's rise and fall, which occurred all in the span of about two months. To do so, the site compared Miitomo to King's Candy Crush Saga and Supercell's Clash of Clans, two games which not only debuted big, but kept players engaged frequently on a week-by-week basis. All three games had a similar huge download spike at launch, with Candy Crush Saga topping the charts, followed by a downturn in downloads in the subsequent weeks.

The difference between the games is that those belonging to King and Supercell saw continued user engagement by the gamers who originally downloaded them. According to SurveyMonkey's numbers, Clash Royale is played on average 4.2 days per week by its users, while Candy Crush Saga is played 3.3 days each week. Miitomo, on the other hand, sees users returning just 2.3 days per week. The site's leading theory on this low return rate statistic is a fanbase that "didn't really get Miitomo." 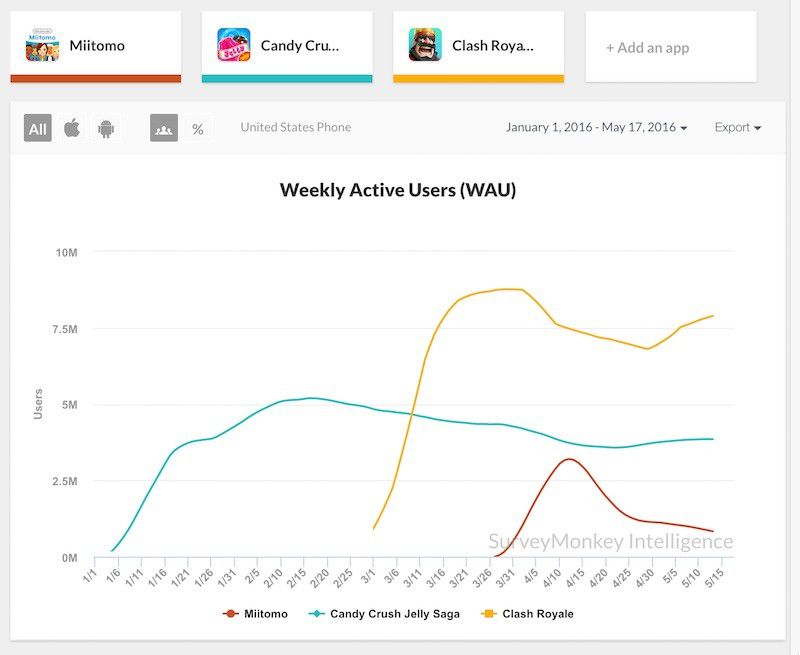 In Miitomo’s case, this lower-than-peers engagement translates into higher churn. The game’s weekly churn more than 50% means that over half of the users of Miitomo on a given week won’t come back and play it again the following week. For some apps that don’t need frequent use this isnt a problem, but for games like Miitomo that are designed for frequent use, churn at this level foreshadows a quick decline.

As others have described it, SurveyMonkey calls Miitomo a social game, whose main value lies in the interaction and presence of friends who can witness the customization of your Mii and the answers you give to the app's questions. Since the only reason for return is content updates centered around avatar clothes and new "Miitomo Drop" levels, the game's feedback loop dissatisfies gamers whose only reason for weekly revisiting is to dress up their Mii to be seen by seen by no one in particular, since they "end up living in a ghost town."

After initial heavy interest in the app, most likely due to its status as Nintendo's first original smartphone game, it appears that most users have decided to simply wait for the company's promise of "pure game applications." What that will take the form of isn't exactly clear yet, but we do know it'll be centered around the Animal Crossing and Fire Emblem franchises to start.

kingofwale
funny... maybe the title should be "Nintendo doesn't really get users".

People want Mario, Zelda, SSBB on their phone, not this crap.
Rating: 20 Votes

Dilster3k
I didn't even bother downloading it, Nintendo is doing it wrong.
Rating: 16 Votes

Chupa Chupa
Mario, Luigi, the Princess, and Kong are sitting at the bar laughing their arses off saying "told ya." Kong even tosses a barrel at the computer displaying the MacRumors story.
Rating: 11 Votes

Data Suggets Nintendo is a Proud Old Japanese Man That Will Go Bankrupt Before Admitting Their Strategies Stopped Making Money A Decade Ago.
Rating: 9 Votes

I didn't even bother downloading it, Nintendo is doing it wrong.

This, I wouldn't even give them statistic so as to reinforce that they don't get it.

Unfortunately, the idiots at Nintendo will take away from this: "See! We told you the App Store was not a profit center for us!" and never bother releasing the titles that actually would make money.
Rating: 6 Votes

But would you or anyone be willing to pay $30+ for a game like a cartridge based game.

Absolutely not, but I wouldn't pay $30 for a game cartridge (they still use those?) either at this time. Nor would I buy a Game Boy. However, I would be willing to pay $5 for Mario on my iPhone. They would need to compete with current game prices.
Rating: 6 Votes

It is actually really good but is an app that desperately needs more! more things to do, more rooms, more challenges!

At the moment you stand in a room answering questions, taking random photos and buying clothes. That's it.

Lots of potential! but only works if you have lots of friends added!

I can't for the life of me fathom why grown adults would partake in this.
Rating: 6 Votes

maflynn
I can't see how this game would ever be captivating. Perhaps it was initially popular because it was made by Nintendo, but it doesn't look to be something that would grab me
Rating: 5 Votes

Chupa Chupa
Also... what is it with Nintendo these days and making games with those creepy oversized head cartoons?
Rating: 5 Votes
[ Read All Comments ]