In the future, drivers in the United Kingdom may be able to store their driver's licenses digitally in Apple's Wallet app, bringing Apple one step closer to fully replacing the traditional physical wallet.

Oliver Morley, CEO of the UK's Driver and Vehicle Licensing Agency, showed off a prototype version of a digital driving license on Twitter this morning (via The Independent). In the image, the Wallet app on the iPhone was shown with a virtual copy of a UK driving license, stored right next to other Wallet cards.

So here's a little prototype of something we're working on #drivinglicence pic.twitter.com/a5eItrdiNI — Oliver Morley (@omorley1) May 13, 2016

According to Morley, the feature is still a prototype and will not serve as a full replacement for a driving license, but an add-on, with its implementation possible following the discontinuation of a paper driving license counterpart in June of 2015. Security is one of the main priorities for the introduction of the digital driving license in the UK.

garirry
I think it's awesome, as long as paper licenses still exist and people can place them somewhere safe in case the iPhone battery dies or something.
Score: 12 Votes (Like | Disagree)

Fantastic news, and as you say, one step closer.

I currently leave the office on occasion to lunch without my wallet (all good except for damn you, Sainsbury's), using Apple Pay on my watch as my preferred payment method. I'll soon be able to go for a drive without it too.

I often drive without my license on me - there's no legal requirement to carry one in the UK: If you get stopped you have 7 days to produce it at a police station.
Score: 10 Votes (Like | Disagree)

zahuh
Love it! If anyone from Apple reads this, please also add school/faculty IDs. Can't wait to get rid of my physical wallet.
Score: 8 Votes (Like | Disagree)

Boatboy24
It'll be another 50 years before a US State adopts something this advanced. :rolleyes:
Score: 7 Votes (Like | Disagree)


In the future, drivers in the United Kingdom may be able to store their driver's licenses digitally in Apple's Wallet app, bringing Apple one step closer to fully replacing the traditional physical wallet.

Oliver Morley, CEO of the UK's Driver and Vehicle Licensing Agency, showed off a prototype version of a digital driving license on Twitter ('https://twitter.com/omorley1/status/731110689939587072') this morning (via The Independent ('http://www.independent.co.uk/life-style/gadgets-and-tech/news/driving-licence-could-be-added-to-apple-wallet-turning-drivers-iphone-into-an-id-a7028346.html')). In the image, the Wallet app on the iPhone was shown with a virtual copy of a UK driving license, stored right next to other Wallet cards. 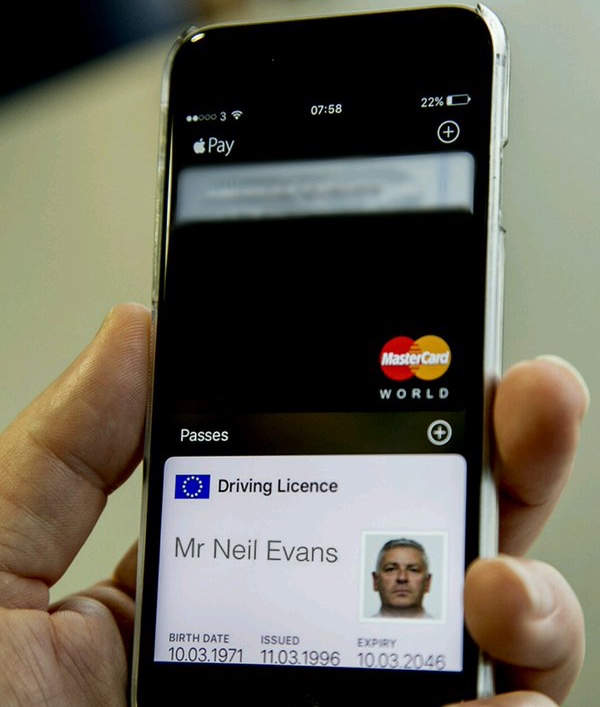 According to Morley, the feature is still a prototype and will not serve as a full replacement for a driving license, but an add-on, with its implementation possible following the discontinuation ('https://www.gov.uk/government/news/driving-licence-changes') of a paper driving license counterpart in June of 2015. Security is one of the main priorities for the introduction of the digital driving license in the UK.

Should the digital driving license feature be introduced in the United Kingdom, it's not a stretch to imagine it also being introduced in additional countries like the United States as the digital wallet concept grows in popularity. In fact, at least one state in the United States is already testing the idea - in 2014, Iowa said it was working on a digital app ('https://www.macrumors.com/2014/12/11/smartphone-drivers-licenses-iowa/') that would allow customers to use digital ID cards instead of physical cards.

There are several ways to ensure that digital IDs aren't tampered with and not simply photoshopped copies. Have the data such as photo and information on a government server. When an official like a traffic cop requests your ID, you show it to them, they scan a randomized QR code that then independently downloads the ID to their own device. If the two don't match perfectly, it's a fake.

This could end up being more secure than physical drivers licenses and end the fake ID market once and for all.
Score: 4 Votes (Like | Disagree)

Not to go all conspiracy theorist here but in the US, I believe you are required to produce identification is requested from the authorities. BUT, if it is in a phone that you must unlock to show them and another physical form does not exist, then it will be pretty hard to say, "yea, i forgot my password so you can't get into my phone." But, I also am guessing if you are in that situation, you'll just give the finger to anyone and everyone at that point just in case.

you don't need to unlock the phone to access Wallet.
Score: 4 Votes (Like | Disagree)
Read All Comments

Friday February 26, 2021 3:57 pm PST by Juli Clover
Apple today sent out emails to developers who are in possession of a Developer Transition Kit, asking them to return the machines by March 31. The Developer Transition Kits are Mac minis with A12Z chips that Apple provided for development purposes ahead of the release of the M1 Macs. Apple in the emails provided developers with shipping instructions, and plans to begin collecting the DTKs...
Read Full Article • 164 comments

Tuesday February 23, 2021 7:07 am PST by Hartley Charlton
Over the past week, some M1 Mac users have been reporting alarming SSD health readings, suggesting that these devices are writing extraordinary amounts of data to their drives (via iMore). Across Twitter and the MacRumors forums, users are reporting that M1 Macs are experiencing extremely high drive writes over a short space of time. In what appear to be the most severe cases, M1 Macs are sai...
Read Full Article • 694 comments