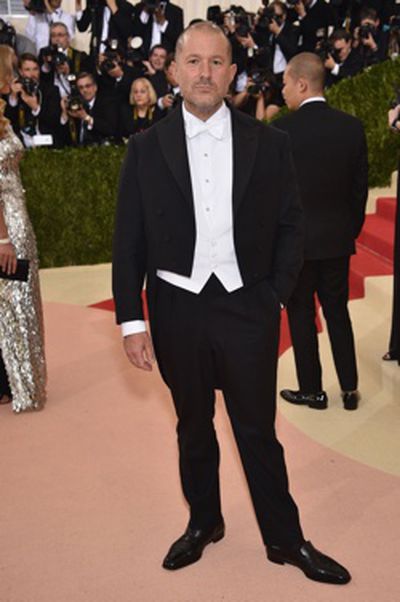 Ahead of last night's Apple-sponsored Met Gala, Apple design chief Jony Ive spoke with fashion website Business of Fashion about the "Manus x Machina" theme of the event and accompanying Costume Institute Exhibition, giving some insight into his thoughts on design and some hints on the future of the Apple Watch.

According to Ive, who has had a hand in the creation and design of all of Apple's modern product releases, including the company's first wearable device, the goal of the designer is to solve problems without making the consumer aware of the problem that was solved.

In our work, we've always tried to design in a way where you're not aware of the problems that we've had to solve. That's the job of the designer: to solve problems and explore, but not really drag you through what all the problems were.

He went on to explain that tech products, like the Apple Watch, are becoming "more and more personal," something that he says technology companies still have a lot to learn about.

I think we have always had a very clear and a very singular approach to how we design products that are more familiar to people, more established in terms of product categories. I think it's very hard to have that same clarity and singularity when you're not absolutely confident in your subject matter."

Business of Fashion asked Ive about his future plans for the Apple Watch and while he refused to give specifics, he hinted that there could be some dramatic changes in store based on Apple's general product release philosophy. He said the Apple Watch is a "natural" category for Apple and that the company thinks about it in a non-opportunistic, "authentic" way.

It's quite interesting that if you look back at the first generation of the iPod or the Phone -- what happens in the next two, three, four years is dramatic. You'd be very surprised about some of the things you would absolutely assume that the first Phone did and it didn't have. [...]

I personally love products when they're at this level of maturity," Ive said of the Apple Watch. "You know we can't talk about future products, but if you look at what we typically do is that we don't make something and stop.

colbertnation
I guess everyone is entitled to their personal opinions, with mine being:

Jeez man, stop being so obsessed with thinness and lightness! And focus on the ergonomics of your designs! iPhone 6/6S is absolutely one of the worst form factors I have held in my hands for any device in this general category: too slippery and very unwieldy. I can't change the volume without interfering with the lock switch, as well as the other way around.
Score: 26 Votes (Like | Disagree)

pedrom
You know... I see Ive, Phil and Cue as Apple's Mccartney. Hair force one, the hardware engineers, other software engineers, Scott were Apple's Lennon.

When Steve was alive, there was a balance in power. Since he died, Cook had to be CEO (face of the company, not part of the brain anymore. Beancounter), Scott is gone, and Ive/Phil/Cue got way more power. The balance was destroyed.

Consequence? The best beancounter on the planet has no one to put him in check, and despite having the best software and hardware engineers in the world, they are powerless against Ive, Phil and Eddy. Everything that comes out of Phil's mouth is pure ********. Ive needs someone to control his genius otherwise it all becomes excessive and narcissistic (rose gold. It's pink, dude.). Cue... I know nothing about him, but I know that he was in control of the MAS and iTunes and he killed both of them, as far as potential is concerned.

Steve itself doesn't seem very important to me. Apple was 100% the work of fantastic talented people. Steve wasn't a great engineer, or a great designer, or great at management. But he was great at putting those Paul Mccartney in check.

We see the result in Apple having the best products and ecosystem (iPhone 6s/6s plus/iPhone SE/iPad Pros/rMBP/iMac) and also the most useless, overpriced, outdated, foolish piece of garbage in the whole tech industry (Every iOS device being sold with 1GB of RAM or 16GB of onboard storage, HDD Macs, Macs with TN Panels, cMBP, Mac Pro with rebranded cheapass """""""""firepros"""""" and not pro at all.).

It all makes sense to me. Seeing Ive in that picture only intensifies this feeling.
Score: 22 Votes (Like | Disagree)

kdarling
Sometimes I suspect that Apple execs must sit around thinking of pompous phrases to repeat, that will awe the naive.

With Jobs, I actually had a strangely perverse admiration of the way he could twist the meaning of words. It was his forte. But they still made sense.

What a boring and uninspiring outfit.

It just needs a few accessories.

In our work, we've always tried to design in a way where you're not aware of the problems that we've had to solve. That's the job of the designer: to solve problems and explore, but not really drag you through what all the problems were.

Nowhere is that design ethic more apparent than in the exquisite humpback battery case.