The Metropolitan Museum of Art today opened its "Manus x Machina" Costume Institute Exhibition, which is being sponsored by Apple. The show focuses on the dichotomy between handmade haute couture and machine-made fashion, featuring pieces that juxtapose traditional hand techniques like embroidery, pleating, and lacework with technologies like laser cutting and thermo shaping.

Apple Design Chief Jony Ive, who is serving as co-chair alongside pop star Taylor Swift and actor Idris Elba, was on hand at the opening and gave an introductory speech, a portion of which was captured on social networking site Periscope. 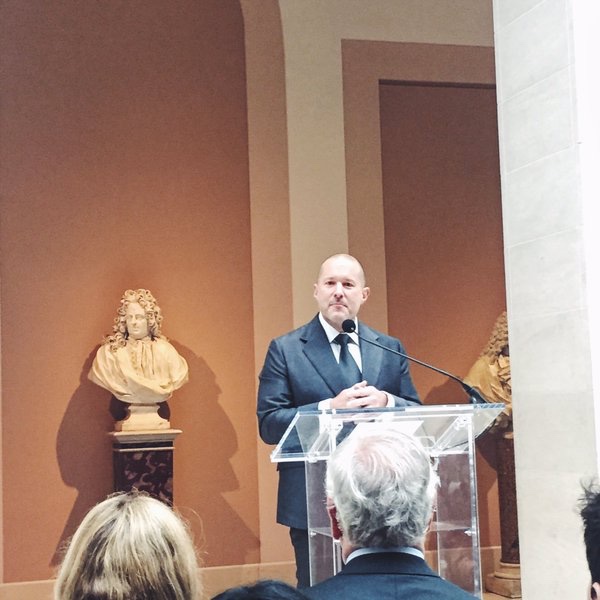 We are thrilled at Apple to help bring to life Manus x Machina: Fashion in an Age of Technology. When Anna and Andrew first talked to me about the exhibition, I was particularly intrigued that it would stimulate a conversation exploring the relationship between what is made by man and what is made by machine. That it would challenge the preconception held by some that the former is somehow inherently more valuable. Not only in the context of today, but also the future.

The Chanel dress that Tom mentioned, which was Andrew's inspiration for the exhibition is a wonderful example of artisan like craft executed with the deepest consideration yet enabled with the very latest technology. The most breakthroughs in craft were once, of course, perceived as truly innovative. Often shockingly so. Once even the simple metal needle challenged the conventional thinking of the time. Now I'm humbled by the innovations of the past in the same way that I am humbled by the work that we can see here today.

It's easy to think a craft can't change, but important to remember all craft process was at some point new. At some point, challenged convention. Not to be contrarian, but enabled by some breakthrough. Some newly discovered principle or sometimes some wonderful accident.

The opening of the Costume Institute Exhibition comes ahead of the 2016 Met Gala, a fund raising event that draws hundreds of celebrities. The Met Gala will take place tonight, and along with Jony Ive, Apple CEO Tim Cook is expected to attend, sitting alongside fashion icon and honorary Met Gala chair Anna Wintour.

killawat
Maybe with him constantly being out of office the MBP team will do something other than slim it down.
Rating: 9 Votes

iLoveDeveloping
"Welcome everyone, check out this piece of ordinary leather on my watch, it costs 1000$, it's called fashion! That is all."
Rating: 8 Votes

Agreed. Design is great, but it should be secondary to function. They could make the iPhone into an earring if they cut out all the functions except phone calls. No one wants that (yet) though.

Don't give them ideas...

Their focus of the last few years. Intersection of fashion and technology.

The elite gather to celebrate in the rarified air they breathe. To posture and pontificate. To photograph and to be photographed.

Safely distanced from the common folk who fill their coffers, it's a celebration beyond compare.
Rating: 5 Votes

69650
Why Apple wants to re-focus into a fashion brand is beyond me. This is presumably why we have these god awful product colours to appeal to the New York fashionistas and Vogue magazine.
[doublepost=1462238477][/doublepost]

I don't see it that way yet. I think this event would have made Jobs very happy, that technology (especially his) had a place beside fashion and art.

As for Ive and Apple's designs of late, I'm not that critical. Apple has never been a company to change form factor just for its own sake. The current Macbook design (barring the paucity of ports) is as elegant and functional as a laptop can be. For most people, it does exactly what it needs to do and it also looks nice (even iconic). A revolution in design will happen both when it's needed and when a new technological breakthrough allows for it.


Steve wore the same clothes every single day. He wasn't remotely interested in fashion.
[doublepost=1462238946][/doublepost]What Apple has in common with the fashion industry: they both use Chinese sweatshops to make their products, have ridiculous mark-ups and talk a load of pretentious bollocks. Hopefully one day Apple will return to being a tech company.
Rating: 3 Votes

Maybe with him constantly being out of office the MBP team will do something other than slim it down.


Agreed. Design is great, but it should be secondary to function. They could make the iPhone into an earring if they cut out all the functions except phone calls. No one wants that (yet) though.
Rating: 2 Votes


Ugn. This narrative again. He's desperate to have his legacy perceived on par with devoices built by hand -- something that's only really become a talking point since he designed the Watch. They say they aren't competing with the mechanical watch makers, but this effort suggests otherwise, at least in Ives' mind.
Rating: 2 Votes

oliversl
Fashion and Broom/Broom, but choices for Apple. I hope he has better keynote skills by now, Apple should train him for public speeches. If that fails, then more gadget colors for you!
Rating: 2 Votes

Col4bin
And this is where Apple has gone off the rails. Johnny I've is busy eating up the spotlight at ridiculous fashion shows and galas, when Jobs' used to be able to keep Johnny's ego in check. Whatever happened to Apple's beautifully utilitarian designed products that innovated and just worked? You can only rehash the same 'ol same 'ol for so long. Instead, iPhone 7 will be a spec-bumped rehash of the 6/6 Plus. No new MacBook Pro to speak of. iPad and iPhone sales are slumping (iPhone alone is down 26% in China, a key market.) Apple Watch only a glorified notification system. Internal development teams fueding. Carl Icahn dumping his stake in the company. Apple's worst Wall Street performance in over 18 years. As a whole Apple is down 11% year-to-date, sliding 27% over the past year alone. The brand is still profitable, but not at the rates that we've grown accustomed too. Perhaps their momentum was unsustainable, but it seems Apple is busy resting on its laurels and past successes, being reactionary to market trends only when it is most profitable to them. (OLED iPhone screens, etc.) This approach can only last for so long. Didn't we learn anything from watching a once market-leading Blackberry self destruct from ineptitude?
Rating: 2 Votes
[ Read All Comments ]