Journalist and author Richard Moss has launched a crowdfunding campaign for his book The Secret History of Mac Gaming. Moss' work will describe the story of a community of gamers and developers who crafted gameplay experiences that would later serve as influential backbones of modern games, gaining little credit for their place in the history of video games in the process.


Among major influences, Moss mentions that gaming on the Mac brought ideas like "mouse-driven input, multi-window interfaces, and even online play" into popularity with gamers around the world. The book will delve into that history and include over 60 interviews with individuals who were there at the height of Mac gaming, all the way back to the 1980s. The description mentions that it should run about 304 pages long in a standard hardback form, with Mac gaming evangelist Craig Fryar contributing in a co-author role in some chapters.


Mac gaming led to much that is now taken for granted by PC gamers, including mouse-driven input, multi-window interfaces, and even online play. The Mac birthed two of the biggest franchises in videogame history, Myst and Halo, and it hosted numerous "firsts" for the medium.

The Secret History of Mac Gaming is the story of those communities and the game developers who survived and thrived in an ecosystem that was serially ignored by the outside world. It's a book about people who made games and people who played them — people who, on both counts, followed their hearts first and market trends second.

Among many topics and chapters that aim to "cast a narrative around the people behind the games," Moss will include stories like Apple's original intention to acquire Bungie games. That, of course, never came to pass due to Microsoft's own acquisition of the studio in 2000, eventually leading to the now massively successful multi-media franchise Halo. Microsoft's cherry picking of "the premier Mac game developer" out from under Steve Jobs didn't sit well with the former Apple CEO, and was one of the first of many stepping stones that led to the less-than-stellar Mac gaming landscape seen today.

The book is currently on the crowdfunding site Unbound, which deals exclusively in getting independent stories off the ground thanks to the monetary input of interested users. As of the time of writing, The Secret History of Mac Gaming needs about 500 more pledges to be successfully funded. Unbound is based in London, but the site offers international exchange rates for customers interested in pledging who live outside of the United Kingdom. There's also a £14 ($20) international shipping charge for most physical rewards.

The initial £10 ($14) reward tier will get pledges an eBook version of the book, while those who are into physical books will need to pledge £30 ($44). Higher rewards include your name listed in the front of the book, exclusive art, a meet-up with the authors and, at the highest £2,000 ($2,900) tier, a "unique dust jacket" created solely for the user who donates on that tier. Every contributor to the campaign will get their name in the back of the book.

Check out the campaign page here to browse all of the rewards, and even read an except from The Secret History of Mac Gaming.

Hindsight being 20/20, that Bungie acquisition by Microsoft... that one had sting a little. But one has to wonder, would Halo be the Halo we know today if it had been relegated to Mac gaming? Apple didn't, and to a large extent still doesn't seem to get gaming. In the end, it may have been for the best.

Apple featured Halo during a keynote before it was bought by Microsoft, and they made a big fuzz about how good Mac OS X was for gaming (native OpenGL and stuff; they even had a dedicated website, promoting games and their technology). I think gaming on Macs would look quite differently today if it wasn't for Microsoft.
[doublepost=1461780190][/doublepost]

Myst is a big franchise? In what universe/alternate timeline?

Myst sold 6M copies, and is still the 13th most sold PC game as up today. Its sequels also sold many million copies.
Score: 4 Votes (Like | Disagree)

ArtOfWarfare
Myst is a big franchise? In what universe/alternate timeline?

That's like saying that Oregon Trail is a big franchise. It was big for the time. Dramatically larger things happened since.
Score: 3 Votes (Like | Disagree)

Myst is a big franchise? In what universe/alternate timeline?

Obviously, one which you don't remember. When Myst arrived in 1993, it was unlike any other game on the market and was the first blockbuster modern home video game. I remember having to get a CD-ROM drive just because of that game, since most computers didn't have them. The two follow-ups to Myst were financially successful as well.
Score: 3 Votes (Like | Disagree)

yaxomoxay
why stop at Mac? Apple II had good games that I remember with a lot of nostalgia 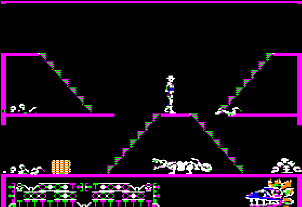 cylack
It is sad how Apple just gave up on gaming. Growing up in the 1980’s I used to game on the Apple IIe and then the IIgs. Apple was where gaming was at. In the 90’s Apple just fell behing PC, with giving inferior graphic cards and sound boards. That trend continues today with Apple giving inferior graphic cards, even on its high end professional desktops. It doesn’t make sense why Jobs didn’t support gaming; it’s not like it would have cost the company a lot in terms of financial investment to do so.
Score: 2 Votes (Like | Disagree)
Read All Comments