Electronics retailer Best Buy has quietly removed all 12-inch MacBook models from its U.S. online store this week, fueling anticipation that Apple will refresh the ultra-thin notebook lineup in the near future. 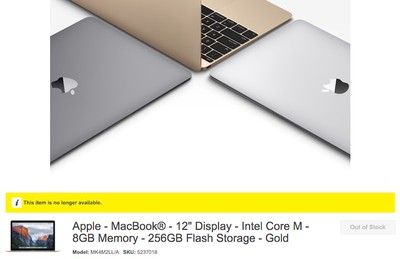 The authorized reseller now lists all 12-inch MacBook models as "no longer available" on its website, whereas some remained available for purchase or in-store pickup as recently as this weekend.

Select MacBook Air models are also on sale for $150 off, potentially signaling that a broader Mac refresh could be imminent. Most current machines are historically due for an update, and appropriate Intel Skylake processors are now widely available. However, it should be noted that Best Buy frequently offers sales on Apple products.

Last month, reference of an early 2016 Retina MacBook, which has yet to be released, was discovered within OS X's System Image Utility application, spurring hopes that Apple will refresh the 12-inch MacBook by late April.

Apple has historically used the "early" model identifier for devices that launch during the first four months of the year, so Best Buy removing 12-inch MacBook stock is yet another indication that Apple may refresh the notebook within the next two weeks. If the refresh is in May or later, a "mid 2016" model identifier will likely be used.

Our Mac Buyer's Guide indicates that it has been 374 days since Apple released the current 12-inch MacBook on April 10, 2015, so it would be appropriate timing for a refresh. The notebook will likely be powered by Intel's low-power Skylake Core m3-6Y30, Core m5-6Y54, and Core m7-6Y75 processors.

Update: Select 12-inch MacBook models are also listed as out of stock at MacMall.

MaulRx
I know for a fact a new model is imminent. How? Simple, I just recently bought one.
Score: 38 Votes (Like | Disagree)

levitynyc
Great, now put a quality processor in there and drop the price to a reasonable level.
Score: 22 Votes (Like | Disagree)

sulpfiction
Refresh the price while your at it.
Score: 21 Votes (Like | Disagree)

Personally want a Retina MBA refresh. 2 or 3 Thunderbolt 3 ports (USBc) + SD-Card + lighter and possibly 14" with thinner bezels. And kill the 11" MBA. No need for it and lower price of MB to make it entry model.

When will people realize that the new 12" MB IS the retina MacBook Air?
Score: 16 Votes (Like | Disagree)

tkukoc
I use the entry level of last years model for every day use, have had zero issues with it. I edit photos, videos and even screen capture material from my phone. Depending on what they change I may pick up this years and sell last years. People should try these out, they aren't "slow" like the reviewers make them out to be.
Score: 12 Votes (Like | Disagree)

I guess we have to wait for 10nm die shrink next year for the MacBook to sport anything other than a crappy Core M processor with limited iGPU. :(

I would hardly call the core M processor crappy.I was amazed at how well it works. Try one out, then post how crappy they are, NOT.
Score: 11 Votes (Like | Disagree)
Read All Comments

Friday June 11, 2021 1:13 pm PDT by Joe Rossignol
On his newly launched Front Page Tech website, leaker Jon Prosser has shared renders showing off the alleged design of the next-generation iPad mini, which he says are based on schematics, CAD files, and real images of the device. In line with details shared earlier this month by Bloomberg's Mark Gurman and Debby Wu, Prosser claims that the new iPad mini will feature slimmer bezels around...
Read Full Article • 136 comments

Friday June 11, 2021 10:27 am PDT by Joe Rossignol
We've highlighted several new features coming in macOS Monterey, such as Low Power Mode and the option to erase a Mac without reinstalling the operating system, but there are some smaller tidbits that we wanted to share. Animated Memoji on Login Screen One small but fun new feature in macOS Monterey is the addition of a personalized Memoji on the login screen, complete with animated facial...
Read Full Article • 68 comments

Thursday June 10, 2021 11:03 am PDT by Juli Clover
Tracking when you've opened up an email and what you've read is something that many companies and advertisers rely on for their marketing efforts, plus there are email clients out there designed to let users know when the emails they've sent have been opened up. Much of this tracking is facilitated by remote images that load when viewing an email, and some of it is even sneakier, with...
Read Full Article • 147 comments