While the iPhone SE rivals the iPhone 6s series in performance with the latest internal hardware, a new video reveals that the recently launched 4-inch smartphone is less durable than its larger 4.7-inch and 5.5-inch siblings when bent under pressure, submerged in water, and dropped on its corner.

Extended warranty provider SquareTrade subjected the iPhone SE, iPhone 6s, and iPhone 6s Plus to a series of excessive bend, drop, tumble, and water tests, and the results show that its compact design does not necessarily make it more durable than the slimmer 4.7-inch and 5.5-inch iPhones.


SquareTrade noted that the iPhone SE bent at 160 pounds of pressure, whereas the thinner iPhone 6s did not bend until an additional 10 pounds later. Moreover, at 178 pounds, the iPhone SE reached "catastrophic failure," whereas the iPhone 6s Plus was only beginning to bend under the pressure.

When submerged under five feet of water, the iPhone SE permanently shut off after less than one minute. "In comparison, the iPhone 6s survived a full 30 minutes and only lost audio," said SquareTrade. "The iPhone 6s Plus started malfunctioning at 10 minutes and eventually died." 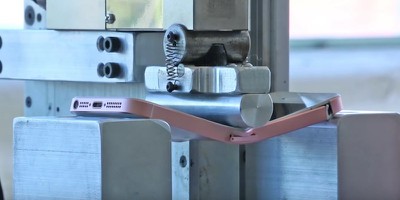 The results should be largely unsurprising given that the iPhone SE's design is virtually the same as the iPhone 5s, which yielded comparable results under similar tests over two years ago. The only cosmetic differences on the iPhone SE are matte chamfered edges and a color-matched inset Apple logo. But, there is video evidence to prove it.

msi92
Kinda funny since no one was complaining about the 5/5s bending :p
Score: 16 Votes (Like | Disagree)

shrouded
Surely the <cough>click-bait</cough> title should read: "iPhone SE found to be exactly the same as 5s in durability test" because it is a 5s with slightly different insides.
Score: 14 Votes (Like | Disagree)

fredcintra
it's funny that nobody cared about this in 2013
Score: 14 Votes (Like | Disagree)

white4s
because that bend test is a real world situation. get real
Score: 7 Votes (Like | Disagree)

andyjam
Finally, a good use for all those rose gold iPhones out there.
Score: 6 Votes (Like | Disagree)

jmgregory1
The thing about testing the bend-resistance of the SE, is that the small form makes is far less likely to be effected by bending, certainly compared to either of the Plus models. Could it happen, sure, but it's not really a problem that people have been complaining about on the 5 or 5s (which are still being used in huge numbers).
Score: 6 Votes (Like | Disagree)
Read All Comments