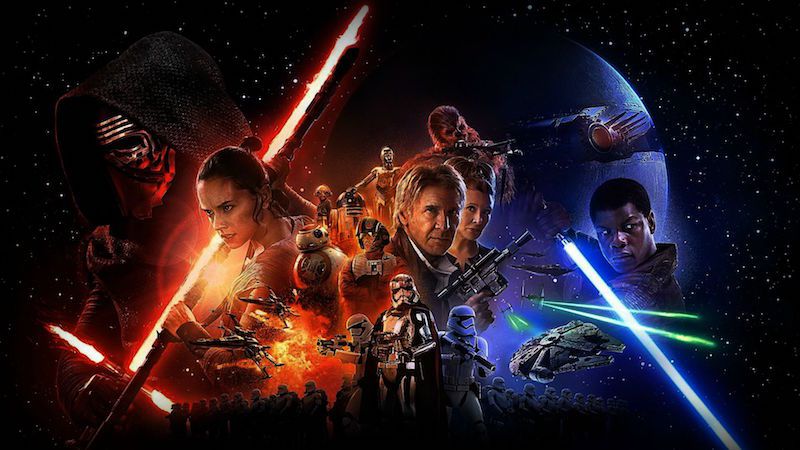 The iTunes version of the film has the same bonus content as the standard retail editions set to launch next week, including a table read of the script and a behind-the-scenes look at the development of the film's creatures. Fans who purchase the film on April 5 will have a handful of retailer exclusive editions to choose from, some of which include bonus content unavailable elsewhere.

iTunes Extras: Discover the complete story behind the film's making in Secrets of The Force Awakens: A Cinematic Journey, revealed through in-depth footage and exclusive interviews with the actors and filmmakers in this feature-length documentary. In The Story Awakens: The Table Read, cast members reflect on the memorable day they all came together for the first time to read the movie's script. Plus Crafting Creatures, Building BB-8, Blueprint of a Battle: The Snow Fight, a host of Deleted Scenes, and more.

Star Wars: The Force Awakens is available to download from the iTunes Store for $19.99 in HD, with the SD version to follow on April 5 for $14.99. [Direct Link]

Ummmmmm ok.... So is MacRumors gonna be announcing every movie released on iTunes now? If so, I'll just turn off MacRumors notifications now.

Nope, but this is one of the highest grossing movies of all time and the audience overlaps quite a bit with ours. Our last post on it was quite popular.

0098386
Excellent! But I'll be waiting for the bluray. For something as magnificent as this film I want to experience it in the best quality I currently can.

Heads up: if you own this box set, there are spaces for episodes 7-9 if you remove the bonus disks. not to forget that John Williams score disappointed as well, which is something that even the prequels delivered on.


John Williams is 84 now. I think we're lucky he delivered anything at all.
Rating: 6 Votes

graemem
In the UK we have to wait until the 11th. It's crazy.
Rating: 6 Votes

pat500000
Oh..i'm just waiting for the next movie about The New Order to hunt down resistance on the planet similar to Hoth...with their AT AT walkers...to blast down their generators. I'm sure Kylo will be there with his storm troopers...and hopefully waiting to see Rey lose her arms as Kylo tells her..."Rey, you are my sister!"
Her response? "NOOOOOOO"
Rating: 6 Votes

I didn't enjoy this movie at all, too many issues, even from a casual point of view. The fact it tried to mirror the original while being a sequel at the same time didn't either. Here's an interesting comparison with the original:
https://www.yahoo.com/movies/watch-a-stunning-side-by-side-comparison-of-star-154726328.html


I really enjoyed it but I the fact it mirrored so closely the original did give me pause. It creates two problems in my mind. One, it's beginning to look like the easiest solution to preventing the spread of evil in the galaxy is to sterilise the Skywalker family. Two, where on earth are the First Order getting the money to build Star Killer Base. I mean the Empire had the resources of an entire, well, empire to spend on the first two Death Stars. But since power has now seeded back to the senate, where's the money coming from?
Rating: 5 Votes

mellomike
Ummmmmm ok.... So is MacRumors gonna be announcing every movie released on iTunes now? If so, I'll just turn off MacRumors notifications now.
Rating: 4 Votes

Dilster3k
Such a disappointment in terms of story, which chronologically doesn't push the overall universe forward because it's practically a remake of Episode IV so Disney can make all the money. I just wish Episode VII was a true continuation. And not to forget that John Williams score disappointed as well, which is something that even the prequels delivered on.
Rating: 4 Votes
[ Read All Comments ]