Apple today debuted a new ad for its music streaming service Apple Music, this time centering around a workout session by artist Taylor Swift. The singer posted the 1-minute video on Twitter earlier this morning, captioning it as "based on true events." 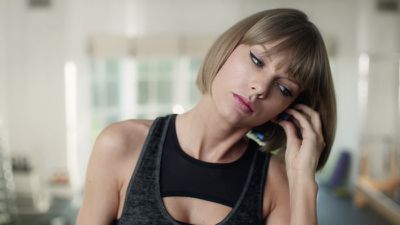 In the commercial, she begins preparing for a treadmill workout by browsing Apple Music for some workout-related songs. After navigating through the service's recommended Activity Playlists and landing on the Running sub-category, Swift decides on a playlist called "#GYMFLOW" and begins listening to Drake & Future's song "Jumpman."

As the video continues, Swift gets really into the song and sings along with the lyrics, ultimately leading her to wipe out on the treadmill with the accompanying tagline for the video describing Apple Music as "distractingly good."

Unlike the "For You" section of Apple Music, the pre-set playlists found on the service's New tab are the same for every user and get specifically curated for different events -- like a BBQ or studying -- by Apple behind the scenes.
Tag: Apple Music Guide
[ 185 comments ]

The problem with this ad is it’s too long and it’s not entirely funny. If Swift needs to be in an ad, then great, get her in one that is at least witty. That’s what’s missing. There is no punch to this ad, just a head drop onto a conveyor belt. Plus, it shows 10 seconds of screen shots, with six screen taps just to get the music going! #OMG.

I prefer the short Apple Watch ads. Or, the Mac/iPod ads where product features front and centre.


In my other post, two examples of attractive young people demonstrating software features. In those ads you only see a short sequence of screen shots, limited gestures, played out to a witty script, unlike the new ad.

yaxomoxay
I really don't listen to her music or anything, but her attitude always impressed me. She's one of the few good examples (at least in public life) in the entertainment industry.
Score: 16 Votes (Like | Disagree)

I know this is off topic but omg she is so beautiful.

She doesn't really do it for me. I dunno maybe I think she's a little too thin, or maybe it's the fact that I find her extremely annoying.
Score: 14 Votes (Like | Disagree)

andyjam
Conclusive evidence that the pre-launch spat was all part of a publicity deal!
Score: 14 Votes (Like | Disagree)

Do you know what's distracting? How much Taylor Swift looks like my mother when she was that age.

Quu
That was pretty funny.
Score: 11 Votes (Like | Disagree)
Read All Comments