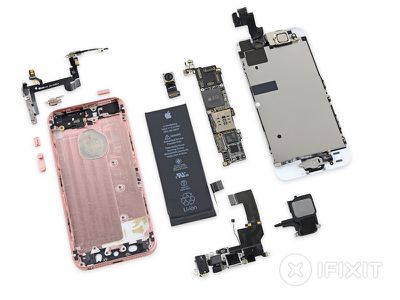 The non-swappable parts include the logic board, rear-facing camera, Lightning connector assembly and battery. The iPhone SE's battery comes in at 1,624 mAh, which is up from the iPhone 5s' 1,560 mAh battery. However, iFixit notes that the SE's battery comes with a different battery connector, so iPhone 5s users hoping to install a larger battery in their phones are out of luck.

iFixit awarded the iPhone SE a repairability score of 6 out of 10, with 10 being the easiest to repair. While the iPhone SE's similarities to the iPhone 5s make it easier to repair, it's still difficult to open because of the Pentalobe screws on the device's exterior. Like most iPhones, the Touch ID cable is also easily damaged if a user is not careful when opening the device.

Nevaborn
It's never fails to stagger me how people can be such hypocrites. How many in this thread alone have said the 5S is the best iPhone ever made.

Now you find out that the new phone has a lot of the same internals suddenly it's junk.

The SE takes everything that was great with the 5S and gives you more. Better camera, better battery, better processor etc. People clambered for a 4" iPhone and now you have one with the same processing power as the flagships you complain.

Reusing parts is not only common sense but it makes financial sense and is good for the environment when we do live with limited resources.

Instead of deriding Apple lets applaud their sensibility
Score: 14 Votes (Like | Disagree)

I would've used the term "vibration motor," but that's just me ...

So everything that I'm reading about SE is that it's just a omelette of spare iPhone parts that Apple had laying around, possibly from customer returns, and repackaged into a "new" phone. I guess the redeeming point is the lower price point at a current technology level. Yay or nay?

So, you truly believe that the SE is basically a phone just made out of spare parts just laying around from customer returns?

The intelligence of some here continues to amaze me.
Score: 6 Votes (Like | Disagree)

mayerkim87
So everything that I'm reading about SE is that it's just a omelette of spare iPhone parts that Apple had laying around, possibly from customer returns, and repackaged into a "new" phone. I guess the redeeming point is the lower price point at a current technology level. Yay or nay?
Score: 6 Votes (Like | Disagree)

So this should mean you could swap the chassis and get the beautiful polished chamfers with all the new tech. That's pretty cool.
If this thing ran iOS 6, I'd already have one.

iOS 6 was the best OS ever. I held on as long as I could but eventually caved and had to get ios7
Score: 5 Votes (Like | Disagree)
Read All Comments