British bank Barclays appears to be in the process of enabling much-anticipated Apple Pay support in the United Kingdom, as multiple Twitter users have shared screenshots of a new terms and conditions page that now appears when attempting to add a Barclays-issued card to the iPhone-based mobile payments service. 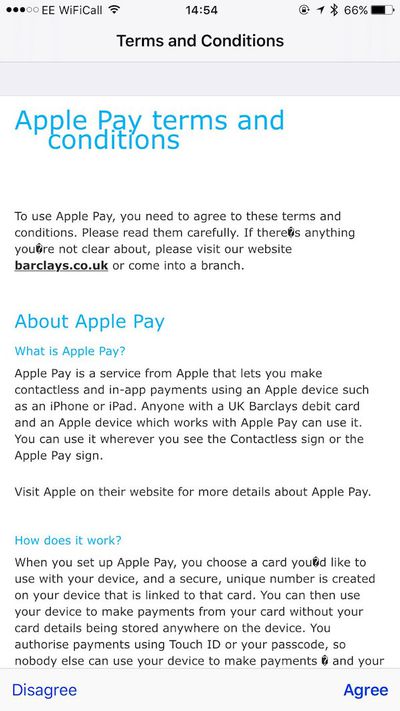 #ApplePay for @BarclaysUK is defo on the way. This is what I'm getting when trying to add a card pic.twitter.com/O7uMHWi5Lj — Nathan Hogan  (@nathanhogan) March 29, 2016

The new terms and conditions landing page is a telltale sign that Barclays may be on the verge of finally becoming an Apple Pay participating issuer, nearly nine months after the service launched in the United Kingdom and within striking distance of its latest promise of a late March rollout.

Barclays has repeatedly hinted that Apple Pay support is coming, but it has yet to deliver on those plans. In July 2015, the bank said Apple Pay support was "imminent," but later confirmed an "early 2016" target, and most recently said the service would launch "within 60 to 75 days" of January 12, or by around March 28.

Barclays has been the largest Apple Pay holdout in the U.K. to date. Other participating banks include First Direct, HSBC, MBNA, Nationwide, NatWest, RBS, Santander, Ulster Bank, and more. iPhone and Apple Watch users can tap to pay at over 250,000 locations across England, Scotland, Wales, and Northern Ireland.

Update: A tipster who wishes to remain anonymous has informed us that Barclays employees have been testing Apple Pay internally with their own debit and credit cards over the past month, as shown in the screenshot below.

The source believes that Barclays will publicly support Apple Pay within a few weeks pending Apple's approval. Apple is also said to be interested in executing a marketing campaign related to the announcement.

AngerDanger
To fund its Apple Pay efforts, Barclays has fired its only typographer.

Sirious
Apple Pay is one of the best services Apple has come out with.
Score: 10 Votes (Like | Disagree)

Unless the capital has suceded recently…

lionsy
Oh Barclays. Better late than never, I suppose! I fear the ship may have set sail for at least a few of your (ex) customers, though - Myself included, Natwest jumped on board straight away, so I jumped ship.

Too many shipping based metaphors. Maybe.

So it's come to this: Barclays Apple Pay Terms and Conditions are Front Page News on MacRumors...

I do love this site, but really?

Yes because in actual fact, it's big news, a lot of people have been waiting on this for a long time. Barclays have been appalling in supporting Apple Pay and I found it hilarious that they thought their "bPay" system could knock Apple off their perch with this.
Score: 6 Votes (Like | Disagree)

Barclays has been the largest Apple Pay holdout in the U.K. to date.

As a Barclaycard customer, I didn't even know that my card wasn't supported with Apple Pay, but to be honest, I didn't even try and register my card. Why? Because my contactless visa on it's own already has the same payment threshold of $30 and it's quicker to use the card on it's own, than to fumble with the bionic thumb print on my iPhone.

I cant see any benefit to using Apple Pay until it has a larger transaction limit than my contactless Visa.

As for bPay - it's just a contactless chip, the same as is in a contactless credit card and you can link it to your card, I haven't bothered, because again it has the same threshold of £30 and it doesn't irritate me having to remove my visa card from my wallet. Although I would say bPay is more convenient than using Apple Pay, given you can get a bPay wrist band for £6... that would be handy for using public transport in London.

I suspect that the reason it's taking Barclays longer is because of bPay. If you have a bPay wrist band and an apple pay device, you would want the payments to tie up to the same source... Transport for London is one reason I can think of that would be an issue, because TfL takes an imprint of your contactless card each time you use it to take a Tube or a Bus in London... at the end of the day it matches up all the transactions from that contactless device and then if you have exceeded the Travel Card fare cap for the day, it will only charge you the travel card price instead of the price of each journey separately (which would be more expensive), TfL further keeps track over the course of a week and if you exceed the weekly fare cap, it will not charge you for additional journeys.

Now... what happens if on day 1, you use Apple pay, but on day 2 you use your bPay wrist band, then on day 3 you use the contactless visa card... does it all tie up to the same card? Or does TfL think they are different devices from different passengers? If that is the case, I might end up paying more for my weekly journeys, even though all those devices are linked to the same bank account, I would sure complain about that if I noticed.
Score: 5 Votes (Like | Disagree)
Read All Comments