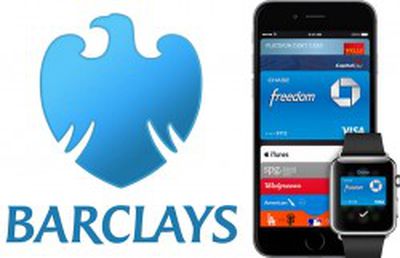 Apple Pay launched in the United Kingdom in July at more than 250,000 locations across England, Scotland, Wales and Northern Ireland, but Barclays remains notably absent from the group of banks supporting the mobile payments service.

We have signed up for ApplePay and will launch it very early in the New Year. We truly value your custom and hope that you continue to bank with us particularly since we are launching this shortly.

A high-level executive at Barclays previously stated the bank anticipated "imminent" support of Apple Pay, and the bank later publicly confirmed it will support Apple Pay in the "future," but no specific launch timeframe had been provided.

Barclays is the only major financial institution of the "Big Four" banks in the U.K. that has yet to adopt Apple Pay. Participating banks include Bank of Scotland, First Direct, Halifax, HSBC, Lloyds Bank, M&S Bank, MBNA, Nationwide, NatWest, Royal Bank of Scotland, Santander and Ulster Bank.

iamasmith
Or to paraphrase... we managed to string you along by saying 'imminent launch' and hope we can keep that going indefinitely whilst we spam our sub-par bPay service adds at you.
Score: 10 Votes (Like | Disagree)

When you look at how long the universe has been here, 4-8 months is imminent.

When you look at the lifespan of a May Fly...
Score: 4 Votes (Like | Disagree)

Kebabselector
Too late Barclays, I've already closed 2 accounts (had for 27 years), once my mortgage deal expires I'll be moving my joint acc and the mortgage to another provider (probably Santander as that's where I opened an account). Only 'issue' I have with Apple Pay is its too easy to spend!
Score: 3 Votes (Like | Disagree)

Because someone decided to double-down on all the cash the had already sunk into the Barclays bPay system.

So now they have a clumsy uncompetitive homebrew payment system, no Apple Pay until half a year after their competitors, and are likely seeing a customer out flux.

I wonder if heads rolled.

I would be amazed if more than a handful of customers switch banks solely for reasons relating to Apple Pay.
Score: 3 Votes (Like | Disagree)

Crusoe
Very, very rough calculation: about 15% of eligible Apple Pay users in the US had tried the service as of June. In the UK, the iPhone has about 36% market share. If you assume 36% of Barclays' 12 million current account holders have iPhones, that's about 4.3 million customers. If you assume that 15% of those customers will be interested in trying Apple Pay, that's about 648,000 customers. And that's a very generous estimate, given that the market share figure includes devices that can’t use Apple Pay and people who won’t have bank accounts, e.g. kids. Also, only about 23% of those who’ve tried it before in the US were using it again in June when given the opportunity. Apply that to the hypothetical interested Barclays customers and that’s 149,040 customers, or about 1.2% of their retail customers who might even think about moving because of Apple Pay.

Figures all very rough and plenty of assumptions, but the long and short of it for me is that there was little incentive for Barclays to rush because the number of customers likely to jump ship is pretty minimal in comparison to their overall customer base. Plenty of other pressing things they should be tackling to retain customers, like their consistently lousy customer satisfaction ratings!

Obviously keen Apple Pay users will be over-represented on these forums, but I'm really struggling to believe that more than a few hundred customers, maybe low thousands, would go through the pain of switching accounts and changing bank cards just because Barclays delayed implementation of an embryonic payment system that doesn't do anything fundamentally new (i.e., it does exactly what contactless cards do, but in a more secure and possibly more convenient way).

(That said, once Apple Pay was announced they should have realised that bPay was dead in the water.)
Score: 2 Votes (Like | Disagree)

Robert.Walter
"We have signed up for ApplePay and will launch it very early in the New Year. We truly value your custom and hope that you continue to bank with us particularly since we are launching this shortly."

This seems like it was written by Ashok from Dilbert rather than Ashok VP of Corporate and Personal Banking.

It is also clear that Barclays is trying to keep customers from fleeing due to the lack of Pay on offer.

I wonder if the stooge that sold the board on the idea that Barclays didn't need Pay got fired.
Score: 2 Votes (Like | Disagree)
Read All Comments