Barclays Confirms it Will Launch Apple Pay by Late March

Barclays has confirmed that it will launch Apple Pay within the next 45 to 60 days, based on a two-week-old email dated January 12, suggesting the large British bank will support the iPhone-based mobile payments service by no later than March 28. 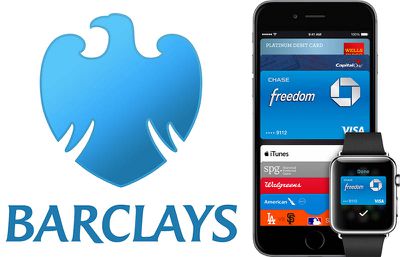 The launch date was provided by Barclays CEO of Personal and Corporate Banking Ashok Vaswani in what appears to be a legitimate email sent to customer Oli Foster-Burnell, and later reported by Engadget. We can verify the executive has emailed customers about Apple Pay in the past.

Barclays is the only financial institution among the "Big Four" banks in the U.K. that has yet to adopt Apple Pay. The country's participating issuers include the Bank of Scotland, First Direct, Halifax, HSBC, Lloyds Bank, M&S Bank, MBNA, Nationwide, NatWest, Royal Bank of Scotland, Santander, Tesco Bank, TSB and Ulster Bank.

I've found more and more retailers want to take your card in their possession and it was starting to irritate me - especially for contactless payments. Apple Pay forces the retailer to pass me the machine, not my card to them.

A few weeks ago I was in a pub and my Apple Pay was rejected. Anyway, long story short, they managed to get hold of my card after more 'rejections' and sent me away to my GF to get her card (stupidly leaving my card on the bar) which the barmaid picked up and tried to do another contactless payment without my authorisation and clearly took my cvv number. My card was cloned and they unsuccessfully (fortunately, as FD spotted it) attempted to pay for some random £1 purchases and then tried to book a holiday on my card.

I assume you mean “arsed” not asked.

I guess you’ve not heard of the new 7 day switch system?

I’ve just switched to Santander from Nationwide (not for Apple Pay reasons). 5 minutes to fill in an online form and that’s it. 7 days later your account, all direct debits, standing orders, contacts, cards….every swaps to your new bank. In fact took me 5 days.

Pretty hassle free if you ask me.

Hassle free if you have no long term commitments such as mortgages or you can find an account which matches what you have at Barclays. I have a "legacy" account which no longer exists with a very large interest free overdraft, breakdown cover, mobile phone cover, and numerous other advantages. No other bank offers anything like it right now so there isn't a chance I would switch and lose all that for Apple Pay.

We're not all students!

Additionally, I doubt Barclays would have lost many customers as a result of this. Only a very small number of people (such as a small minority on here), would actually care about this and Barclays couldn't care less about you if you tried.

That and probably 90% of Barclays revenue arrives through commercial banking so the fact that they probably lost 0.005% of their customers as a result of not having Apple Pay is....well meaningless.

It's very amusing how some people feel that without Apple, the world would almost fall apart! I've had Apple Pay for three months now (since I got my 6S), and I've only ever used it once....most of my friends with iPhones say exactly the same!
Score: 5 Votes (Like | Disagree)

MLVC
Yeah yeah, what about the rest of Europe?
Score: 4 Votes (Like | Disagree)

Yeah yeah, what about the rest of Europe?

The end result is still that Android users and others will happily use HCE payments, while iPhone users can do nothing but wait for the illustrious Apple Pay that may never arrive in their country.

Between myself, my wife and my kids I would say we conduct well over 50% of our electronic transactions via Apple Pay now. Mostly using the Apple Watch because it is so convenient and so far very reliable. It uses tokenisation so it's private and secure and I can use it pretty much anywhere that contactless is used. Android users typically don't care so much about privacy or security so I guess they'll use whatever is available, or not use it as was the case with Wallet.
Score: 3 Votes (Like | Disagree)

About bloody time. It's ridiculous. I wonder how many customers they've lost over this. I would swap, just can't be asked.

I assume you mean “arsed” not asked.

I guess you’ve not heard of the new 7 day switch system?

I’ve just switched to Santander from Nationwide (not for Apple Pay reasons). 5 minutes to fill in an online form and that’s it. 7 days later your account, all direct debits, standing orders, contacts, cards….every swaps to your new bank. In fact took me 5 days.

Pretty hassle free if you ask me.
Score: 3 Votes (Like | Disagree)
Read All Comments