Apple today released tvOS 9.2 to the public, marking the second major update to the tvOS operating system since the fourth-generation Apple TV was released in October. tvOS 9.2 has been in beta since January 11 and brings a slew of new features that were introduced throughout the testing period.

tvOS 9.2 can be downloaded over-the-air through the Settings app on the Apple TV 4 by opening the System section and choosing the Software Update option.

Subscribe to the MacRumors YouTube channel for more videos.
tvOS 9.2 brings two new text input methods -- dictation and Bluetooth keyboards -- to the fourth-generation Apple TV, making it much easier to insert passwords and search for content like apps, movies, and television shows. Bluetooth keyboard support is a major feature that was missing from previous versions of tvOS, a curious absence as the Apple TV 4 has supported Bluetooth gaming controllers since launch.

With dictation support, Apple TV users can dictate text for tasks like spelling user names and passwords instead of typing them in. Dictation capabilities are available in all countries where Siri is available on the Apple TV. Bluetooth keyboard support and dictation join the Siri remote and the Apple TV iOS app as ways to interface with the Apple TV 4. 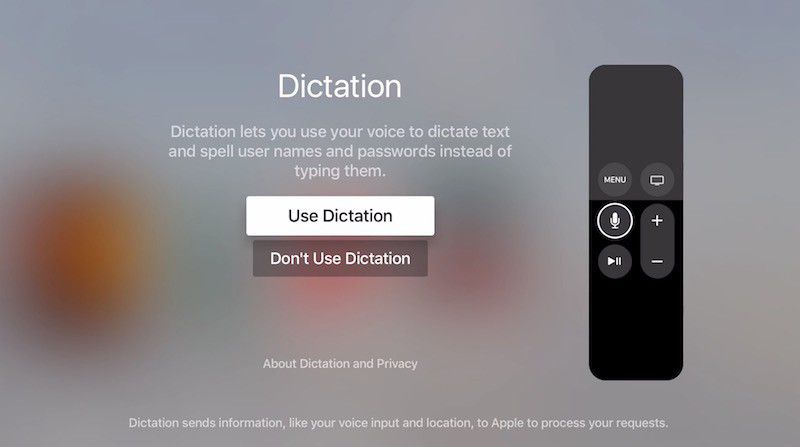 In tvOS 9.2, apps can be grouped into folders, making it possible to create a more organized iOS-style Home screen, and there's also a new look for the App Switcher interface.

Full support for iCloud Photo Library is included, so Apple TV users can access all of their photos on the device, including Live Photos taken with the iPhone 6s and 6s Plus. Photo Stream was the only available photo option prior to tvOS 9.2, and iCloud Photo Library can be turned on through the Settings app.

Siri's capabilities are expanded in tvOS 9.2, a change that may be the most welcome to most Apple TV users. Siri is now able to search the App Store, improving app discovery. Using Siri, searches can be made for specific apps or categories of apps, like social media or games.

Subscribe to the MacRumors YouTube channel for more videos.
After installing tvOS 9.2, Apple TV owners will be prompted to update their Siri Remotes with new firmware. The update will improve motion sensor performance within games and apps and it adds support for additional sound bar and receiver hardware.

Other new features in tvOS 9.2 include support for MapKit, so developers can incorporate maps into their tvOS apps, and additional Siri languages. Siri supports US Spanish (in the US only) and French Canadian (in Canada only). UK English, Australian English, and US English are available as options in the UK, Australian, and US Storefronts when English is set as the tvOS language.

With today's update, the fourth-generation Apple TV is gaining sorely needed features to improve the overall user experience, so Apple TV owners will likely want to install the new software right away.

Nozuka
siri remote firmware update now worked. let it charge and didnt do anything for like 10 minutes and when i checked in the settings again, the firmware had a higher number.

never got any info about it. i guess its designed to happen silently.

i wonder if it needs 50% of battery like other iOS devices. i'll charge it now

edit: more info on remote firmware updates.
battery level is indeed a factor too. it seems to update the firmware when the device is not in use.

Would you believe I've never even plugged my remote in to charge since I got the Apple TV when it was released? The battery life is so good on this thing.

It was at about half. Guess I'll charge it for this update, then forget about it for months to come again. :)
Score: 2 Votes (Like | Disagree)

After installing tvOS 9.2, Apple TV owners will be prompted to update their Siri Remotes with new firmware.

does not seem to happen on my apple tv.
Score: 2 Votes (Like | Disagree)

I believe you are correct. "Best quality available" was not there when I originally set up my Apple TV in November. I assume this means that it will output BETTER formats than DD 5.1 if/when they are available in the source material (i.e. perhaps something like DTS-HD, True HD, Atmos, etc.).

I have noticed the audio sounding slightly better than usual, but I could be wrong. Interesting.
Score: 1 Votes (Like | Disagree)
Read All Comments

Wednesday April 1, 2020 2:45 pm PDT by Juli Clover
Apple in March updated both the MacBook Air and the iPad Pro, and with the iPad Pro increasingly positioned as a computer replacement, we thought we'd compare both new machines to see how they measure up and which one might be a better buy depending on user needs. Subscribe to the MacRumors YouTube channel for more videos. We're comparing the base model 12.9-inch iPad Pro and the base model...
Read Full Article • 90 comments