Earlier this week, we shared a blue-light reduction app called FlexBright, which worked similarly to Apple's own Night Shift mode. Apple initially approved the app, which was able to adjust the screen temperature for the entire iPhone, but after it garnered attention following our post, Apple pulled it from the App Store.

FlexBright developer Sam Al-Jamal told MacRumors he had worked with Apple through several app rejections to get FlexBright into the App Store and that no private APIs were in use, something that was seemingly confirmed by the app's approval, but further review from Apple led to FlexBright's removal. Al-Jamal has shared Apple's explanation with MacRumors following an "exhausting discussion" with the Cupertino company. "The bottomline is [Apple] won't allow apps to change screen colors," he said. 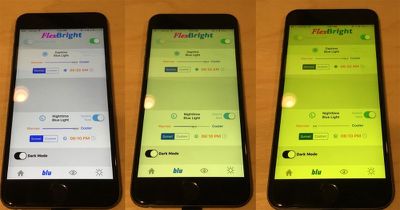 The FlexBright app adjusted the temperature of the screen to make it more yellow, like Night Shift in iOS 9.3
Al-Jamal was given two technical reasons behind FlexBright's removal from the App Store. First, the app was using custom-created classes based on non-public APIs.

I recreated three classes based on non-public APIs. Even though these are custom classes that I created, but essentially they're using the same methods as in their non-public APIs.

Second, the app was using silent audio to keep FlexBright running in the background, a frowned-upon tactic that can result in battery drain. Late last year, the Facebook app for iOS was using excessive battery life, something caused in part by a silent audio component.

FlexBright masked the silent audio with a music player to "justify the background music activity," something that Apple approved twice even though the music playing function doesn't appear to work.

We labeled it as a new feature to "rest/close your eyes for few minutes and listen to some music". Now Apple says this is not the intended purpose of the app and they won't allow this approach.

Apple asked Al-Jamal to remove the blue light filter to get FlexBright back on the App Store, but he declined so that users who have already purchased the app can keep the feature. "For all intended purposes, FlexBright is dead," he said. He does plan to go on to make a new app that will detect eye fatigue based on screen brightness and time spent on an iOS device.

- Basically using private APIs, even though not directly.
- Claiming your app does one thing so that it can run in the background indefinitely, but it actually does something else.

Yep, no surprise this got pulled.
Score: 36 Votes (Like | Disagree)

atomic.flip
Apple is so full of itself when it does stuff like this. I hate to say this but I'm really glad that Microsoft is finally giving them a run for their money in the desktop and laptop space. Now with something like the Galaxy S7 from Samsung which has force touch and animated photos. Honestly Apple needs to mellow out a bit and let their app ecosystem flourish.

- Clarification - Force touch did not make it into the S7 or S7 Edge, though it is being tested for use in a future handset from Samsung.
Score: 19 Votes (Like | Disagree)

sputnikv
i have no problem with this. i can only imagine the mess it would cause with the average user dealing with third party apps and the troubleshooting nightmare it would cause, especially on the eve of the feature being implemented in iOS 9.3...

imagine the average user complaining that their pictures look yellow or different and associating it with the camera or their screen and apple not being able to assume in any measure the fault of any one given app
Score: 16 Votes (Like | Disagree)

Apple is so full of itself when it does stuff like this.

Andres Cantu
So why was it approved in the first place?
Score: 9 Votes (Like | Disagree)
Read All Comments