FlexBright, an app that allows the user to manually adjust the display temperature of an iOS device, was recently approved by Apple, marking one of the first third-party apps that's able to function in a manner similar to the company's own Night Shift mode, set to be released in iOS 9.3. The only catch is it must be triggered somewhat manually in response to a notification, rather than continuously, like Night Shift or f.lux.

Currently available for download in the App Store, FlexBright was created by Intelligent Apps, who worked with Apple to find a way to implement blue light reduction capabilities. The app includes controls that allow it to both dim an iPhone or iPad's display and adjust the display temperature to cut down on blue light exposure.

FlexBright runs in the background on an iPhone or iPad, sending notifications to prompt users to change the brightness or the blue level on the display at sundown or at user-specified times. After tapping on the alert, FlexBright launches and changes the brightness or blue light filter to a preset value, which can introduce a lot more yellow light than Apple's own Night Shift mode in iOS 9.3. FlexBright's screen adjustments work throughout the iOS operating system, in third-party apps and on the Home screen. 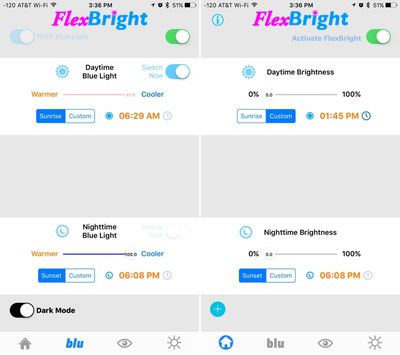 According to one of the developers behind FlexBright, using this notification system was the only way Apple would allow the app to change brightness or blue light while running in the background. The app does not use private APIs to change the screen temperature, instead utilizing a "native objective-c library that filters the blue light from the iOS screen."

In the app, which has an admittedly confusing interface, there are toggles to turn the screen yellower on demand and adjust alert times for the notifications that will allow it to work on an almost-automatic basis. There are also alerts for adjusting brightness and there's a toggle for a "Dark Mode" that turns the screen black and white, similar to (but not identical to) the Grayscale mode under Accessibility settings.

Left Photo: Coolest, Center Photo: About half way, Right Photo: Warmest
Apple's decision to allow FlexBright into the app store is interesting because just a few months ago, there was a controversy over f.lux, a similar app. F.lux is a well-known blue light reduction app for the Mac that allows users to adjust their screen temperature, shifting it towards the warmer yellow spectrum in the evenings. In November, the developers behind f.lux launched an iOS version that was side-loaded on devices using Xcode due to its private APIs, something Apple quickly said was not allowed. F.lux's developers have said that it is not possible to introduce a f.lux app for iOS using Apple's existing tools and has asked the company to "open up access" to Night Shift features.

FlexBright has a primitive interface, and current color schemes seem yellower than Apple's implementation of Night Shift, but it opens up an interesting option, especially for those who have devices that won't be supported by Night Shift. FlexBright is available from the iOS App Store for $2.99. [Direct Link]

Update: FlexBright has been removed from the App Store. No explanation for the removal has been provided by Apple at this time.

Chrjy
That is one confused UI design right there :eek:
Score: 18 Votes (Like | Disagree)

Norbs12
How do they let this slip by but something of actual value like f.lux get's blocked...
Score: 16 Votes (Like | Disagree)

adamneer
Whoever designed that logo must have thought they were a pharmaceutical company.
Score: 15 Votes (Like | Disagree)

Burger Thing
Have a healthy lifestyle with regular sleep patterns and do some exercise - and you will fall asleep with no problems no matter what your frikkin' display color temperature is.
Score: 13 Votes (Like | Disagree)

mozumder
These color-temperature apps are completely useless to help sleep patterns. I tried Flux for a year.. complete waste.

The only thing it did was change everything to orange.
Score: 12 Votes (Like | Disagree)
Read All Comments