The new change has generated some complaints since it seems that users will want to use both features in the evening hours. 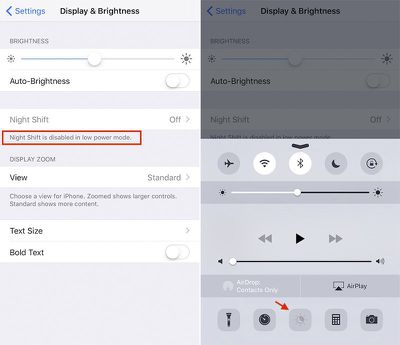 Night Shift is now disabled in Low Power Mode on iOS 9.3 betas
Meanwhile, tapping the Night Shift icon in Control Center no longer brings up a contextual menu with "Turn On For Now" and "Turn On Until Tomorrow" options. Instead, the toggle now manually activates Night Shift until the next trigger in your automatic schedule, such as sunset, sunrise, or a specific time.

Night Shift no longer has a contextual menu in Control Center (right)
Similarly, there is a new "Manually Enable Until Tomorrow" toggle in the Night Shift settings that keeps the feature turned on until the following morning's sunrise, or another specified time. This means the toggles in Settings and Control Center, which can also disable Night Shift, are essentially the same in this beta.

Also in the settings, the color temperature slider has also been moved to the bottom of the menu. The "Cooler" and "Warmer" labels have been changed to "Less Warm" and "More Warm," while the small blue and orange circle markers have been removed. New fine print says "warmer temperatures can reduce eye strain."

Night Shift is a major new feature in iOS 9.3 that, when enabled, automatically changes the color temperature of an iOS device's display to reflect the time of day. The feature helps to limit your exposure to blue light in the morning and night, which makes the display easier on your eyes and can improve your circadian rhythm.

Apple seeded the fifth beta of iOS 9.3 to developers and public testers on Tuesday. The software update will likely be public released this month. To read about and share other changes, head over to our iOS 9.3 Beta 5 Bug Fixes, Improvements, and Changes topic in our community discussion forums.

longofest
being disabled in low power mode is a real bummer. My battery is going under 20% at night, precisely when I need both options available to me.
Score: 15 Votes (Like | Disagree)

Mad Mac Maniac
Removing the contextual menu is the right call. I'm not running the beta, but I honestly still don't understand the difference between what the two options meant. That's not a good sign.
Score: 12 Votes (Like | Disagree)

I'd be interested to learn the reason behind disabling Night Shift in Low Power mode. Does it drain the battery excessively? Ive been running the betas, but haven't noticed my phone battery level dropping that much while night shift was running.

NightShift is probably done using ColorSync. When slowly transitioning from day to night, the whole color transformation tables need to be updated over and over again and the cocoa change notification need to be transported to all active applications during the time of the change which in turn would again change their appearance over and over again. Even if this notification will not be parsed, all application need nontheless be woken up for a short period of time. To make the change not noticeable, there would be several iterations, draining unnecessary power. As we all know, the low power mode is here for precisely hindering that. Therefore disabled. They could theoretically not fire a notification during low power mode, but therefore creating the need for cached notifications getting active as soon as an application gets active. But this - to my knowledge - does not exist in the cocoa framework. Maybe in a later version but it looks like they are not there yet. That's my guess.
Score: 9 Votes (Like | Disagree)

ClaytonK
Is this a feature appropriate for Control Center? I'm guessing I'll turn it on and never touch it again.
Score: 8 Votes (Like | Disagree)
Read All Comments