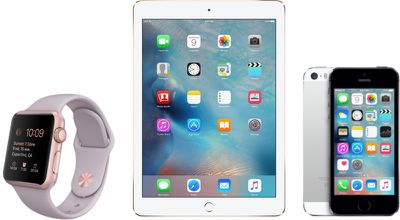 Re/code reports that the much anticipated Apple Media event will actually fall during the week of March 21st, not on March 15th, as originally rumored.

Or to put it another way, it’s not going to be on March 15, the time frame that other outlets previously reported, according to several sources. It is not clear if the event was moved or if this was the same timing as Apple had always planned.

The event, previously known to take place in March 15th, is pushed back a week to March 22nd if our source is correct. Apple allegedly have sent notifications to leave the schedule available from the 21st to 23rd, making us guess that the event will occur a week after the original known date.

The date change had been largely ignored at the time due to the unproven source of the rumor, but it appears that Re/code has confirmed the new date according to "several sources".

Besides the 4-inch iPhone SE, Apple is also expected to introduce a new 9.7" iPad (possibly dubbed as the iPad Pro), and new Apple Watch bands.

Update: According to BuzzFeed's John Paczkowski, Apple's media event will take place on Monday, March 21, likely at Apple's Town Hall in Cupertino. The event will be held one day before Apple is scheduled to stand off against the FBI in court.

Bring on the WWDC and the new MacBooks.
Score: 42 Votes (Like | Disagree)

Customer One: "Well I have the iPad Air 2, what do you have?"

Customer One: "But it looks exactly the same as mine, what's the difference?"

ghost187
We have some VERY exciting products to announce today!

iPhone SE: It's almost as good as the 6S, but smaller, with an older design!

iPad 3: It's almost as good as iPad Pro!

More Watch Bands! Also, we've updated the software so you can (buy and) wear multiple watches that do the same exact thing!

Can you imagine how disappointing this event will be if there is no Macs?
Score: 17 Votes (Like | Disagree)

iabacus
The first event I haven't been that excited about
Score: 14 Votes (Like | Disagree)

JohnApples
Please, more watch faces. I want a square one, a weather one, and some more unique and less-plain-looking ones.
Score: 13 Votes (Like | Disagree)
Read All Comments

Friday May 20, 2022 8:07 am PDT by Joe Rossignol
Apple now plans to release a new 27-inch display with mini-LED backlighting in October due to the Shanghai lockdown, which has resulted in production of the display being delayed, according to display industry consultant Ross Young. In a tweet, Young said Apple is in the process of moving production of the display from Quanta Computer to a different supplier and/or location, resulting in a...
Read Full Article • 152 comments