Rumors surrounding the 4-inch "iPhone 5se" continue today with new information pointing to the possibility of Apple dropping the "5" from the name altogether and simply calling it the "iPhone SE." As reported by 9to5Mac, the new name would be a shift in focus on the 4-inch iPhone's "enhanced and special edition" status, making it stand out from the numerically named crowd of the iPhone family. 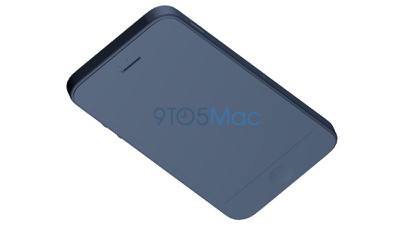 Based on Apple reinvigorating the 4-inch iPhone screen size at a time where the market is mostly moving toward larger smartphone screens, it would make sense for Apple to position this device as simply the “SE.” Sources say that the dropping of the “5” from the name also simplifies the iPhone lineup as bringing back an iPhone “5” variant amid the iPhone “6” lifecycle could potentially confuse customers. The iPhone SE will replace the existing iPhone 5s and will take its price points.

Mock-ups from earlier in the week suggested that the iPhone SE will look near-identical to that of the iPhone 5s, with a body measuring in at 123.8mm tall, 58.6mm wide, and 7.6mm thick. The device is said to have an A9 processor, an M9 chip to accommodate the new fitness tracking features of iOS, and include "Hey Siri," Apple Pay, and Live Photos support.

The design renderings of the iPhone SE show conflicting claims in regards to the new iPhone's power button placement and camera, but the latter feature is said to support an 8-megapixel system. The iPhone SE is believed to come in the four expected color options of the iPhone line -- Silver, Space Gray, Rose Gold, and Gold -- and be available in 16GB and 64GB sizes.

It won't be long until we find out everything about the iPhone SE, with reports pointing towards a March 15 media event for the reveal of the new 4-inch iPhone. On the same day, Apple is predicted to announce what was thought to be called the "iPad Air 3," but is now believed to be a smaller 9.7-inch addition to the iPad Pro family.

Jal217
The line needs simplifying. How about iPad Pro iPad and iPad mini. iPhone plus, iPhone and iPhone mini? That is so much simpler. I think the numbers will stay though because it sells phones when you increase the number. But SE just doesn't fit
Score: 15 Votes (Like | Disagree)

lightmyway
This makes more sense. I would love if they stuck to this form factor and name, and just quietly changed out the internals as they go along, like they do with Macs.
Score: 13 Votes (Like | Disagree)

LukasValine
Or how bout they call it the iPhone 6s Mini.
Score: 13 Votes (Like | Disagree)
Read All Comments