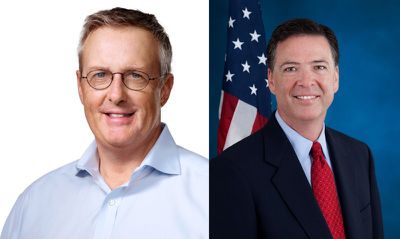 Comey will participate in the first panel, while Sewell will testify in the second panel alongside Worcester Polytechnic Institute professor Susan Landau and New York District Attorney Cyrus Vance. Vance last week said his office was in possession of 175 iPhones that can't be accessed due to encryption. "This has become the Wild West in technology," he said. "Apple and Google are their own sheriffs and there are no rules."

The congressional hearing, titled "The Encryption Tightrope: Balancing Americans' Security and Privacy" will examine encryption technology and its impact on American citizens and lawmakers with the goal of finding a solution that lets law enforcement do their jobs without affecting the privacy protections of U.S. citizens.

"The widespread use of strong encryption has implications both for Americans' privacy and security. As technology companies have made great strides to enhance the security of Americans' personal and private information, law enforcement agencies face new challenges when attempting to access encrypted information. Americans have a right to strong privacy protections and Congress should fully examine the issue to be sure those are in place while finding ways to help law enforcement fight crime and keep us safe.

Head Apple lawyer Bruce Sewell is leading Apple's legal team in its fight against the FBI. Apple plans to oppose an order that would require it to help the FBI brute force the passcode on San Bernardino shooter Farook Syed's iPhone. The FBI is demanding Apple create a software that would both disable passcode security features and allow passcodes to be entered electronically.

In an interview yesterday, Tim Cook said that the FBI was asking Apple to build the "software equivalent of cancer," something the company won't do. While Apple has announced its intentions to fight the order, its official appeal is due tomorrow.

Update: In related news, Microsoft today announced its full support of Apple's decision to stand against the FBI. Next week, Microsoft plans to file an amicus brief to back the company. Verizon has also come out in support of Apple. "We support the availability of strong encryption with no backdoors," Verizon CEO and chairman Lowell McAdam said in a statement.

Chatter
This will be about who can scare the people more.

175 iPhones?! So Apple were right, this wouldn't be a one off rogue version of iOS that was used on one phone.

garirry
FBI: just oooone phone pleease
FBI: Just 12 phones, come one, that's not a lot
FBI: Really? Is 175 phones that big of a concern to you?
FBI: Wow, this country is a bunch of terrorists, not letting us unluck 1,920 phones.
FBI: Dude, 20,000 phones? That's like nothing.
FBI: 240,000 phones we have to unlock, and Apple won't even let us unlock one? Those terrorists.
FBI: 2.8 million phones from innocent pe- I mean terrorists we have to fix. This country truly is corrupted. DONALD TRUMP FOR PRESIDENT 2016!!! MAKE AMERICA GREAT AGAIN AND BOYCOTT APPLE!!!
Score: 12 Votes (Like | Disagree)

bdkennedy1
Remember that Microsoft software from like 10 years ago that let's the FBI hack into any computer? Then a hacker stole it and it got passed around on torrent sites? Yeah, it's like that.

Google Microsoft Windows back door and look at all of the hits that come up. And people wonder why Windows needs anti-virus software.
Score: 11 Votes (Like | Disagree)

That's 175 just in the possession of the NY DA's office. What about the rest of the country? Between DA's, Police, Sheriff, FBI, etc, there are probably thousands.
Score: 7 Votes (Like | Disagree)

the-oz-man
This remains the single best point of logic I've read on MacRumor in many a year.

If I was a defense attorney representing a person accused of wrongdoing, and this type of "back door" iPhone data was being used by the prosecutor, I would ask in discovery for a detailed, exacting description of how The information was obtained by Apple. I would probably want to do a discovery deposition of each of the technicians that were involved in crafting the software that unlocked the phone. I would probably also want them to produce the code to have my own forensic experts examine it. The cat is out of the bag then
Score: 7 Votes (Like | Disagree)
Read All Comments