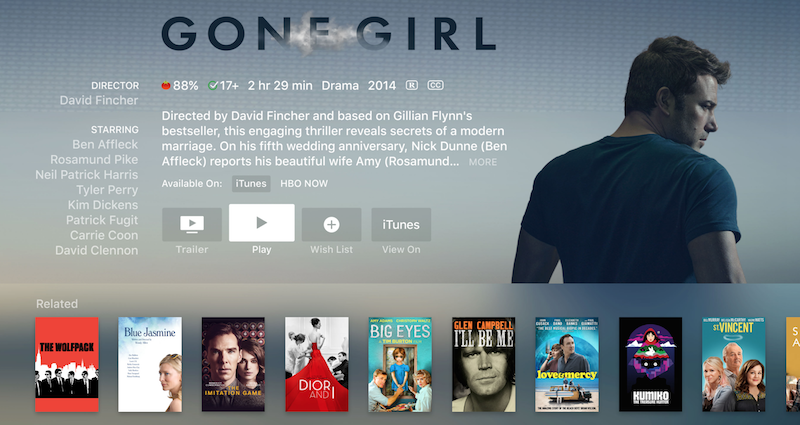 At launch, universal search only worked with iTunes, Netflix, Hulu, HBO (Now and Go) and Showtime (Regular and Anytime). Apple had promised to expand the feature and the number of sources included over time and has, thus far, delivered on that promise. Last month, Apple added FOX NOW, FX NOW and National Geographic as sources; in January, Apple added PBS and PBS Kids.

Apple plans to continue opening up its universal search API to additional partners and apps in the future.

surfingarbo
"Apple plans to continue opening up its universal search API to additional partners and apps in the future."

Plex guys, if you're reading this, please continue being awesome. I know you'd love to be one of those additional partners. Plex users would like you to be a partner too.
Rating: 7 Votes

Nicky G
Amazon needs to release a Prime Video app already, this is ridiculous. With Siri search. Freaking get on it, Bezos.
Rating: 5 Votes


How exactly do you expect that to work seeing as all these other apps are pulling info from the cloud? Plex pulls from a local library on your private network.
Rating: 3 Votes

You missed the entire point. Let me better phrase this

You aright but Plex allows you to stream from YOUR server back at home and each persons server is different from the rest. Where as all these other streaming services have library that is the same to everyone so there is only one set of movies and shows siri needs to know about.

When you ask Siri for something, she goes back to Apple Servers gives the data containing what you said and she gets a message with what to say back from the Apple Servers.

When I say cloud I am referring to Apple Servers.


That still doesn't explain why Plex would be issue. Siri is mostly a speech-to-text engine. From what I understand, this is how it works: (1) I say "Smallville" into the remote; (2) The ATV4 sends the audio file of me saying it to Apple's Siri servers; (3) The Siri servers interpret that audio file, and return the string "Smallville;" (4) The server sends that string back to the ATV; (5) The ATV then queries the apps that support the Siri search interface as described in Apple's APIs (not yet a public API for tvOS, but clearly it's there) for content that matches the search term "Smallville" and show you the results. Whether that query is for Netflix or Plex, it makes no difference.

Now, we don't know exactly how Siri works. I have looked a little bit with Wireshark, but haven't really done a proper analysis, but I think it is as above. Still, one could argue that steps 4 and 5 are different. It could be (4) The Siri server queries all available streaming partners for content that matches the term "Smallville" and gets a list of results; (5) The Siri server sends back that list of results to the ATV and shows you the results. There are a few reasons I think this other way is wrong and not how it's done: (a) the ATV would either have to filter our results for apps that aren't installed or based on georestrictions you are under or based on parental controls, or would have to send a list of all your apps, restrictions, and parental controls to the Siri server with the original search audio for the filtering to happen there, the former is inefficient as it causes queries to happen and data to be passed that is not used and the latter is insecure as it publicly exposes your app lists etc; (b) it would be inefficient from a bandwirth standpoint for Apple's servers to do all the querying when they can offload that on to the individual ATVs; (c) the content providers would rather the querying was done from individual ATVs as they like to gather that data on a per-user level to know what you are searching for and when in order to better build the recommendation engines. Even if it is done in this alternative way, which I don't think it is, but even if it is, the query for Plex would still work as Plex has a standardized URL and server for everyone to connect to that then reroutes to the appropriate user's installation (a forwarding server, of sorts).

Still, from what I have seen, Siri server just returns a speech-to-text string, and all searching is done on the ATV itself. This is obviously the most efficient way to do it.
Rating: 2 Votes

XTheLancerX
I either don't understand this feature or I can't use it. On my ATV4 I search for a show or movie, even request for Netflix, and it brings it up to purchase or whatever on iTunes.
Rating: 2 Votes

I either don't understand this feature or I can't use it. On my ATV4 I search for a show or movie, even request for Netflix, and it brings it up to purchase or whatever on iTunes.


If you search for a movie or show from the main screen using Siri it should find it everywhere it's available, and show you all of the choices.
[doublepost=1456206054][/doublepost]

My sentiments exactly. No Amazon support thus far? That's been the deal breaker for me.


It's about to cost Amazon my prime business. And thousands of dollars a year in purchases.
Rating: 1 Votes


When you ask siri for something, it goes to Apple servers to get you an answer.

All these other providers have data that is universal to everyone so it makes it easy. It becomes a very different story with Plex
Rating: 1 Votes