Rogue Amoeba today announced the launch of Airfoil 5, introducing an updated version of its popular software that allows users to transmit any audio from their Macs or PCs to their home audio systems. Airfoil 5 includes a revamped interface with new Retina-compatible graphics and design improvements that include longer volume sliders in the main Airfoil window. 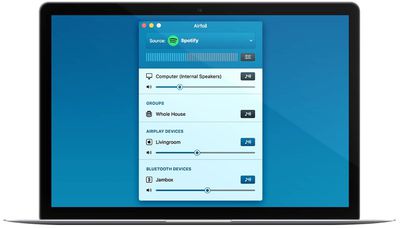 Airfoil Satellite is a companion app that lets audio be sent to Macs, PCs, and iOS devices. Running Airfoil Satellite on one of these devices will turn them into audio receivers, and the software also allows for the remote control of supported apps like Spotify. It's possible to adjust volume, skip tracks, pause music, and more.

With Speaker Groups, it's possible to group up multiple speakers to send audio to more than one speaker at the same time. All the speakers in a home can be grouped together for house-wide music playback or organized into rooms for playing music in a specific area.

Other new features include silence monitoring, which will automatically disconnect Airfoil if there's no music being played, custom equalizer presets, sync adjustments, options to hide speakers, and an improved Instant On feature that will capture audio from already-running apps.

Airfoil for Mac or PC can be downloaded from the Rogue Amoeba website for $29. There's also a free trial for first time users who want to check out the software before purchasing.

I'm having trouble understanding the utility of this app. Don't iMacs and all MacBooks come with Bluetooth? They can already send audio to Bluetooth devices and AirPlay devices.

You are right. But they can only send audio to one device at a time (unless you use iTunes to send to more then 1 airplay device?). I can use Airfoil to send music from Spotify playing on my Macbook Pro to my Apple TV connected to my home stereo, a speaker outside connected to an Airport Express and to two other speakers connected to two iPads in two different rooms (you can use an iPhone or iPad as a receiver with their companion app). The music is all perfectly synced on each device and speaker. It is really great software.
Score: 3 Votes (Like | Disagree)

tliede20
I love AirFoil, and I'm happy to see it advancing, the UI is very nice! I like the ability to group now, I also like the fact that it allows me to stream to bluetooth and other sources too, that makes me never purchase sonos :P
Score: 1 Votes (Like | Disagree)

HopefulHumanist
I'm having trouble understanding the utility of this app. Don't iMacs and all MacBooks come with Bluetooth? They can already send audio to Bluetooth devices and AirPlay devices.

Xgm541
This is a neat app. I've been using it for a few years. Glad to see the updates...
Score: 1 Votes (Like | Disagree)
Read All Comments