Earlier today, reputable KGI Securities analyst Ming-Chi Kuo said the iPhone 7 Plus will likely have a dual-lens camera system based on technology Apple acquired from LinX Imaging. The new hardware could lead to some significant improvements in camera quality on Apple's next flagship smartphone.

We previously provided an in-depth look at LinX's camera modules after Apple acquired the company, but it is worth recapping some of the major advantages of their technology, given today's iPhone 7 Plus rumor.

The images captured by the LinX camera are brighter and clearer, with significantly reduced noise levels, compared to smartphone cameras. Available detail when zoomed into a photo was also much greater, as can be seen in the comparison below. View this PDF for more side-by-side image comparisons. 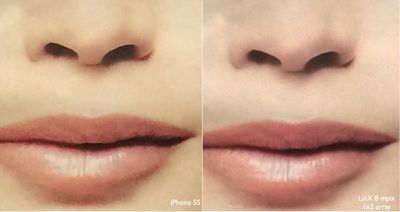 In the photo below, the image was taken in mid-levels of light, at approximately 40 to 50 lux, similar to a decently well-lit room in a house or restaurant. The LinX sensor let in more light than the iPhone 5 or the Samsung Galaxy S4, for a photo that is clearer and sharper with less noise.

LinX technology is able to significantly improve low light performance by using multiple channels to increase the sensitivity of the camera for better detail. It also keeps exposure times short to cut down on the motion blurring that can impact photo quality in conditions where lighting is not optimal.

LinX technology doesn't have to compromise between pixel size and resolution, as it can use small pixels but still let in adequate amounts of light.

3D depth mapping has a number of useful applications, including 3D scanning of objects, sizing of objects, background removal and replacement and gesture recognition. The depth maps also allow for improved refocusing; by knowing the depth at every pixel, the feature allows for a synthetic blur to be applied that emulates a shallow depth.

Read A Look at LinX Camera Technology for more details about the dual camera systems.

Glassed Silver
If I see the words "SLR[-like] quality" and "phone" in one sentence one more time...

That's some of the biggest PR bull ever and most of the media outlets chime right in.

goobot
Why do I need to get a phone that's way too big for me in order to get the improved camera?
Score: 24 Votes (Like | Disagree)

So friggin annoying...why are they comparing to the 5s instead of the a new 6s. Probably because there is not much of a noticeable difference.

voyagerd
Now if the laws of physics could enable us to have optical zoom the same as a 400mm lens on a phone, I'd be set.
Score: 18 Votes (Like | Disagree)

AppleWarMachine
oh course it looks better...comparing it to an iPhone 5 and 5s :rolleyes:
Score: 17 Votes (Like | Disagree)

If I see the words "SLR[-like] quality" and "phone" in one sentence one more time...

That some of the biggest PR bull ever and most of the media outlets chime right in.

The best part is when the idiots who fall for that PR see my pictures (shot with a D90 from 2008) and ask me where I got them printed because they came out so much sharper than their iPhone prints.

But then you have people in the photo forum here who insist their iPhone is as good as an SLR and show side-by-side pics under ideal lighting to prove it. When you suggest they try shooting in dimmer light or compare crops so you can really see sharpness at print resolution, they never seem to notice those posts.
Score: 15 Votes (Like | Disagree)
Read All Comments

Monday February 6, 2023 10:13 am PST by Juli Clover
Apple today released new tvOS 16.3.1 and HomePod 16.3.1 software updates, with the software coming two weeks after the tvOS 16.3 and HomePod 16.3 updates were released. According to Apple's release notes for HomePod software 16.3.1, the update includes general performance and stability improvements. Notes for tvOS 16.3.1 are unavailable as of yet, but are probably similar to the HomePod...
Read Full Article • 147 comments