Apple is offering 50 percent off a range of productivity apps as part of a "Get Productive" iOS App Store promotion that's taking place this week. Each app is available at a 50 percent discount from its regular App Store pricing. Many well-known apps like Clear, Things, Drafts 4, and Deliveries are included in the promotion. 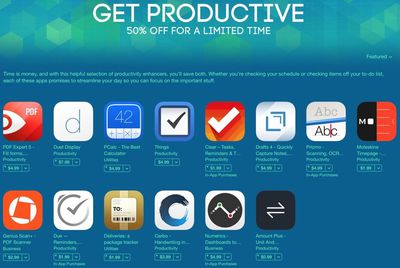 Available apps cover a wide range of productivity tasks, from note-taking and editing PDFs to creating to-dos, making scans, converting currency, and more. A full list of apps and their pricing with the discount is below:

Some of these apps have Mac counterparts that are also being offered at a 50 percent discount, including PCalc, Things, Clear, and Prizmo.

Apple's App Store promo sales often last from Thursday to Thursday, so these discounts should be available for the next six days.

In a separate sale, password management app 1Password for Mac is available from the Mac App Store at a 50 percent off discount, dropping the price to $24.99. This is the lowest price AgileBits has offered for several months, and at $24.99, 1Password is well worth picking up. The iOS app is a free download.

Seandroid
I always have grand expectations of how productivity apps will change my life and then I just completely forget about them and never use them.

nezr
Deliveries is a must have if you always buy things online. Tracks packages with ease.
Score: 3 Votes (Like | Disagree)

RamGuy
I tend to purchase apps on sale that I end up barley using.. But there are some real great apps on sale here so I bought Deliveries as my previous go-to app for delivery tracking, Posted, is no longer being maintained.

I also grabbed Duet as that something I might actually end up using. Things is also a awesome tool, better than things like Wunderlist in many regards but it's ridiculously overpriced for what it is, especially when you can grab Wunderlist for free, have everything synchronized between devices and it offers client for iOS, Mac and Windows and you won't need to pay for the app on any of the platforms.

I do normally pay for superior products but the advantages Things offer compared to Wunderlist gets completely butchered by their horrendous price model.'

Forgot to mention 1Password. I already use the services so I'm all covered but it's the best password manager available after LastPass got purchased by LogMeIn. Their Windows application could use a better UX-design but that's pretty much all the negative I can say about 1Password.
Score: 2 Votes (Like | Disagree)

gpspad
I was on the fence with 1password until I read an article about using almost like a will. I am happy with keychain and use mostly apple apps as I have a Mac, iPad, and iPhone. I didn't have the need to redo all my saved passwords.

But the article talked about using 1password as a 1stop storage list of all your important info. I started keeping bank account numbers, insurance policies, ect.....in a secure note.

If I need the info it's right at my finger tips, if my phone is stolen I know it's locked and encrypted.

I still use keychain for website and wireless passwords, but use 1pasword as a synched digital wallet.

Just wish there was a way to kind of hide it so it's not so obvious on the phone.
Score: 2 Votes (Like | Disagree)

m.gansrigler
I'm happy to say that Yoink, my Mac app that improves and simplifies drag and drop, is part of the Get Productive Mac App Store Promotion as well, and on sale for 57% off :)
http://eternalstorms.at/yoink