Wednesday January 20, 2016 6:12 pm PST by Husain Sumra
With the iOS 9.3 beta, Apple introduced a new feature called Night Shift. It's designed to cut down the amount of blue light an iOS device puts out in the evening, as Apple noted that studies have shown that blue light can negatively impact sleep by altering the body's circadian rhythm. Today, reddit user nickjosephson spotted a Night Shift toggle in Control Center on Apple Canada's iOS 9.3 preview page. 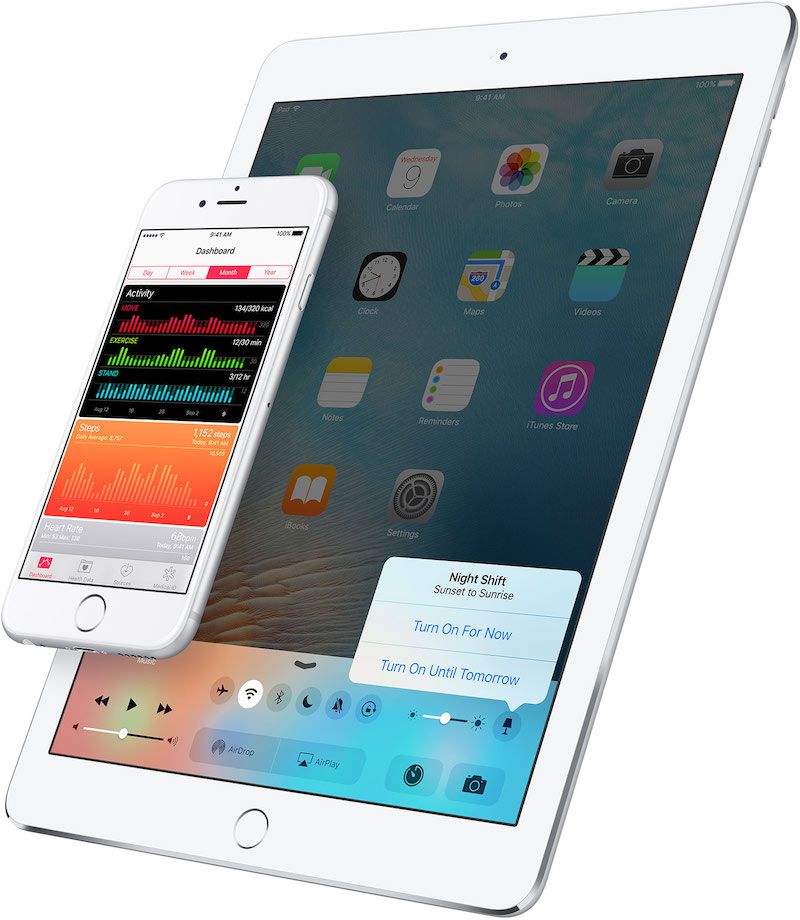 The Night Shift toggle sits next to the brightness slider in Control Center with two options available: "Turn On For Now" and "Turn On Until Tomorrow." While the toggle is shown on an iPad Air, it's likely the new feature works on iPhones as well, though it's unclear where the toggle would fit on the iPhone's smaller Control Center.

The Night Shift toggle is not featured on the American version of the iOS 9.3 preview page, which instead shows Apple News' "For You" section. Apple News is not yet available in Canada, which is the likely reason why the images are different.

Night Shift can be activated on 64-bit iOS devices running iOS 9.3 by toggling it on in the Display and Brightness section of the Settings app. Users can either create their own Night Shift schedule or allow iOS to turn it on after sunset and turn it off at sunrise.

The Night Shift toggle is likely to make its debut in a future beta of iOS 9.3. The next beta is expected in the coming weeks.

dalthicks
I like this option. The only thing I need on the control center now is power save mode :p
Rating: 19 Votes

Actually I wish they would just let us customize all the toggles.
Rating: 16 Votes

No. Because it's not a dark mode.

Night shift? First I heard about this useless thing. If you're having trouble sleeping...just put that ipad away.

You obviously haven't been paying attention. There's a lot of research on the claims that cool light from phones, tablets, and televisions can contribute to insomnia. This feature is not useless.
Rating: 13 Votes

If light is the cause of insomnia, would it be hard to put that ipad away for few hours and sleep? Where did you get this research from?


Turn it off and go to sleep? This is for using in the hours before bed, decreasing blue light exposure a few hours before sleeping helps with better sleep. It's a pretty well-researched topic.

If light is the cause of insomnia, would it be hard to put that ipad away for few hours and sleep? Where did you get this research from?


why is it so difficult for some people to grasp the idea that others have different lifestyles than yours? the world doesn't and will never revolve around you. you don't want the feature, then don't use it.

what if i need to be on my iOS device right before bed because I'm sending a time sensitive email? let me just put my iOS device away and potentially risk losing a client. EXCELLENT IDEA!
Rating: 10 Votes

Not really what it does.
Rating: 10 Votes

Unless they are attempting to sleep in said theater, that's not how the feature will be used.
Rating: 6 Votes

stiligFox
Almost looks like a leaked image for an iPad with 3D Touch...

ALSO - I have to say that I'm loving Night Shift - for kicks I turned it off one night in bed and the sudden change to the bright cool screen made my eyes tear up from the brightness.
Rating: 6 Votes

et01267
Does a night shift toggle mean that even more inconsiderate *******s will think it's OK to use their phones in movie theaters?
Rating: 6 Votes