Following the launch of Apple Music, Apple today updated GarageBand for Mac to version 10.1, adding new features and a huge amount of new content for musicians and sound makers to work with. The update to GarageBand was first announced in mid-June.

The update brings 10 new Drummers with beats appropriate for electronic music and Hip Hop styles like House, Trap, Techno, and Dubstep, plus it adds more than 100 EDM and Hip Hop-inspired synth sounds, each of which includes Transform Pad Smart Control for tweaking sounds to each user's personal taste. There are also 1,000 new Apple Loops made from a wide variety of instruments. 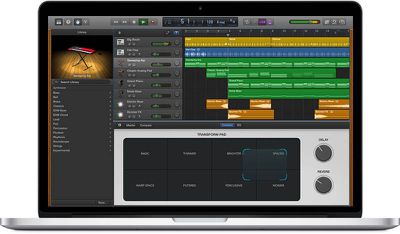 Today's update brings support for the Force Touch trackpad when GarageBand is used with the MacBook or new MacBook Pros, and it includes a new feature that lets music be shared directly to Apple Music Connect, Apple's new social networking platform aimed at artists.

Apple has also released a minor update for its GarageBand app for iOS, introducing bug fixes and the ability to share music directly from the app to Apple Music Connect.

GarageBand for Mac can be downloaded from the Mac App Store for $4.99. [Direct Link]

GarageBand for iOS can be downloaded from the App Store for $4.99. [Direct Link]

(I feel better after yelling)
Score: 5 Votes (Like | Disagree)

kjm18
And still no iTunes update
Score: 1 Votes (Like | Disagree)

Getting eerily close to Logic territory. Will be interesting to see what happens in a couple of years.

Don't forget, you can use Apple's iOS "Logic Remote" app to control GarageBand, and Mainstage 3. Logic Remote is free, and wicked cool.
Score: 1 Votes (Like | Disagree)

WestonHarvey1
Where the hell is iTunes 12.2?
Score: 1 Votes (Like | Disagree)

Is Garageband not free anymore?

edit- Or rather, when did it become paid? I have it on my iphone and macbook pro and don't recall ever paying for it.