Following a lengthy beta testing period, VideoLAN has announced that its VLC app is now available for the fourth-generation Apple TV on the tvOS App Store.

The app is a full port of the VLC media player and supports virtually all video formats in line with the VLC for iOS app. There are also many tvOS-specific features. 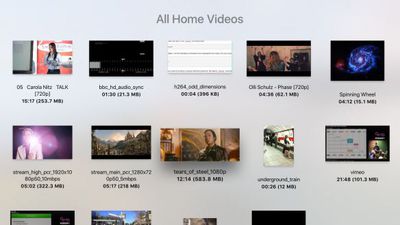 - Content Discovery: The app automatically discovers video files stored on your local network, using the SMB, UPnP media server, FTP and PLEX protocols. You can browse through videos with the Siri Remote and select content for playback. During playback, subtitles can be added from OpenSubtitles.org.

- Saved Logins: Login credentials can be securely stored on the Apple TV and will be synchronized to and from your iPhone and iPad.

- Remote Playback: VLC displays an IP address under the Remote Playback menu on Apple TV. This address can be typed into your computer's web browser, and an interface will pop up allowing you to drag and drop a file to play it on your TV remotely.

You can drag and drop multiple files to queue them. The files will remain available locally on the Apple TV until its internal storage is maxed out. The web interface can be used for remote play, pause and seeking.

For playback of a network stream URL on your TV, just paste it to the field and push return. Once playback concludes, you will find it in the Network Stream view for future use. Like for files, you can send multiple URLs rows in a row and they will be attached to the playback queue.

- Playback: VLC for the Apple TV supports basic play, pause and seek controls. You can navigate the app by chapter and titles or select from multiple audio and subtitles tracks. Other features include custom playback speed and hatchet.is integration for artist imagery and biographies.

VLC is currently beta testing Apple TV support for cloud services Dropbox, OneDrive and Box. The feature will be available in the near future.

LiE_
Many will be very happy at this addition to the app store.

But since this is mac rumours, most will be disgusted and outraged.
Score: 31 Votes (Like | Disagree)

what can you do with VLC on TV? i never use it. i use plex for streaming movies since apple tv streaming is a little bit laggy

Torrented files/movies/TV shows right? I mean that's why people want Plex and this right? Can I just go ahead and say it?
Score: 12 Votes (Like | Disagree)

justgeig
WOAH. Remote playback is huge if it works well. Can't wait to get home and try it out!

The new Apple TV is so underutilized, the potential is through the roof. Come on developers! We are hungry for your apps and will pay money for them!
Score: 10 Votes (Like | Disagree)

Torrented files/movies/TV shows right? I mean that's why people want Plex and this right? Can I just go ahead and say it?

How about my ripped dvd's and blurays I buy???
Score: 6 Votes (Like | Disagree)

hagar
I still use iTunes and Home Sharing to watch my videos the Apple way. With VideoDrive ('http://www.aroonasoftware.com') all my videos are tagged and imported in iTunes. Great to organise movie and TV shows with it. And incompatible videos are converted in the background with HandBrake so I can also sync them to iOS.

Maybe I'm the only one still using iTunes and probably, PLEX has some great features I'm missing out on, but I like to do it the Apple way as much as possible.
Score: 5 Votes (Like | Disagree)

Torrented files/movies/TV shows right? I mean that's why people want Plex and this right? Can I just go ahead and say it?

I don't have a single torrented movie file in my just-sub-terrabyte movie library. All those movies are ripped from DVDs and BluRays (which isn't exactly 100% abiding by EULAs, but IMHO ethically sound). They are then completely tagged and catalogued using Ivy and/or Subler (I've gone back and forth between the two), although of course Plex does a good amount of tag-discovery automatically if they weren't already tagged.

Frankly, streaming from the computer a room away in my house should be a lot higher quality and less laggy than streaming from Apple's servers in the cloud (with Plex in general it is). Combined with wide availability of cheap physical media which can easily be ripped to local storage, and the cheapness of local storage, it is a good way to go. That said, the ripping tools often enough get forced-subtitles wrong (nothing like watching a movie and people start talking in a foreign language and you aren't sure if there are supposed to be subtitles showing what they said...), the ripping/converting process takes a few times as long as the movie to complete, and Plex's interface while fancy and nice is not in the same realm of usability as the native Apple interface.

Do people use Plex to manage their torrented files? I'm sure they do. But don't pretend that the only interest in Plex (and I guess VLC, alhough I find VLC's interface abhorrent personally) is for illegally-obtained content.
Score: 4 Votes (Like | Disagree)
Read All Comments