Facebook may be developing an official Messenger desktop app for Mac, according to TechCrunch. The technology website obtained a blurry photo that allegedly shows a Facebook employee using the Messenger client on Mac, which would be easily accessible from the OS X dock as opposed to a tab in a web browser. 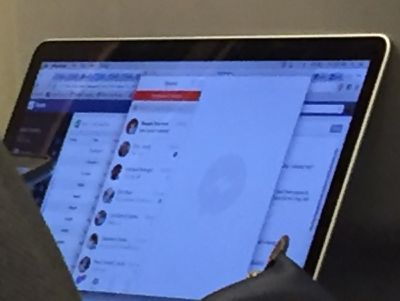 Leaked photo of claimed Facebook Messenger for Mac app (Image: TechCrunch)
Messenger for Mac appears to have a navigation tab bar in the bottom left with options matching the Messenger for iOS mobile app, including Recent, Groups, People and Settings. These menu options are reportedly not found in unofficial Messenger apps, making it more likely the app is not a third-party version.

The company's goal is likely to create a standalone Messenger experience on Mac, similar to how it released a dedicated Messenger app for iOS in August 2011. But unlike when Messenger was detached from the main Facebook app on iOS in July 2014, the web version of the chat platform may remain available alongside the desktop app.

It’s unclear but seemingly unlikely that Facebook would require users to chat via the desktop software instead of the website. We have no information about when or even if Facebook might release Messenger For Mac. The company often builds and internally tests apps that never ship. Still, this app seems like a smart move. Slack has proven people enjoy a dedicated desktop app for messaging. It could help Facebook box out competitors like Google, WeChat, Line, Kik, and KakaoTalk.

Facebook released a Messenger desktop app for Windows in March 2012, and said it was "busy working on Messenger for Mac" at the time, but the company discontinued its Windows app two years later and has yet to release a Mac app. Facebook also launched Messenger.com last April as a standalone web chat client.

Facebook often internally tests apps that never ship, so it remains unclear when or if Messenger for Mac will be released. A company spokesperson declined to "comment on rumor or speculation," but author Josh Constine said that is "the same boiler plate response" he has received about rumors proven true in the past.

sanke1
Tracking is needed for desktop market isn't it? For mobile market, it's been covered. I feel incomplete if no one is tracking me. For iMacs powered from mains, there will be no complaints of phantom battery drain issue. Development should be easier.

Will the desktop app also bug you every time you open it to turn on notifications?

LOL, I was amazed when I saw that the first time. It could be worse. I've started seeing apps giving me push notifications for no good reason (e.g. "you haven't used this app in a while"). I delete stuff like that immediately. Misusing the APN service should be grounds for banishment from the App Store.
Score: 14 Votes (Like | Disagree)

fishbert
Will the desktop app also bug you every time you open it to turn on notifications, or is that "feature" reserved for the mobile app alone?
Score: 10 Votes (Like | Disagree)

sudo1996
Ugh, it stinks that they started disallowing Jabber clients to connect. Last year, I used to be able to contact all my Facebook friends (aka most people I know) just through Messages, plus people on iMessage, SMS, and AIM. It was perfect! I wish Apple would update Messages to support whatever proprietary protocol Facebook uses because I really don't want to have to run multiple messaging apps.

EddiOS42 has the right idea. They probably did it so they can get people to use their own stuff. Unfortunate.
Score: 9 Votes (Like | Disagree)
Read All Comments