Kenwood today announced that its two aftermarket CarPlay and Android Auto systems unveiled at CES 2015 are now shipping to retailers with a suggested price of $900 to $950 each. The Kenwood DDX9702S and Kenwood Excelon DDX9902S are the only aftermarket units that allow drivers to switch between CarPlay and Android Auto without having to manually change settings or reset the unit. 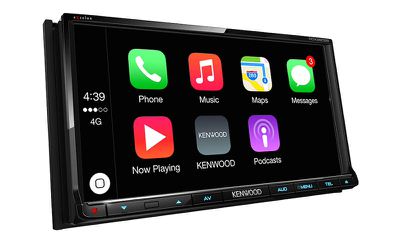 The multimedia receivers serve as in-car entertainment and information systems, with both featuring a 6.95-inch resistive touch display with navigation, a back-up camera view and multiple audio and video options. Both units are also SiriusXM-ready and feature Bluetooth for handsfree phone calls and streaming media playback, built-in HD Radio, an HDMI input with MHL support and DVD playback.

Pioneer announced in late March that its CarPlay and Android Auto aftermarket systems are also available at select retailers in the United States for between $700 and $1,400. The second-generation NEX in-dash multimedia receiver models available include the AVIC-8100NEX, AVIC-7100NEX and AVH-4100NEX, and the CarPlay-only AVIC-6100NEX and AVIC-5100NEX.

iBlazed
I feel like displaying text messages on the screen is a really bad idea....
Score: 10 Votes (Like | Disagree)

OldSchoolMacGuy
Crazy expensive considering the iPhone does all the processing. There's really very little needed from the hardware itself. All you really need is a screen and chipset that works with CarPlay. Sadly the licensing fee raises the price of things. The current cheapest CarPlay compatible deck is around $450 from Pioneer.
Score: 7 Votes (Like | Disagree)

I feel like displaying text messages on the screen is a really bad idea....

I feel like displaying text messages on the screen is a really bad idea....

CarPlay never actually displays message's text, Siri reads it aloud. You'll see a banner notification (and hear an audio cue) that a message has arrived and you can either touch that banner or say "Hey Siri, read my messages." Even when replying via Siri, the text is not displayed on the screen.
Score: 6 Votes (Like | Disagree)

Smith288
CarPlay prices are still too insane for what they do.
Score: 6 Votes (Like | Disagree)
Read All Comments