Samsung today held a press conference at the Consumer Electronics Show in Las Vegas, where the company announced new rose gold and platinum variants of its Samsung Gear S2 smart watch and pledged future iOS support for the device.

First introduced in August, the Gear S2 is Samsung's newest smart watch and its first with a round display. The Gear S2 was originally available in black or silver with matching leather or rubber bands, but later this year, Samsung will also introduce high-end 18-karat rose gold and platinum plated versions, made from real precious metals much like the Apple Watch Edition. 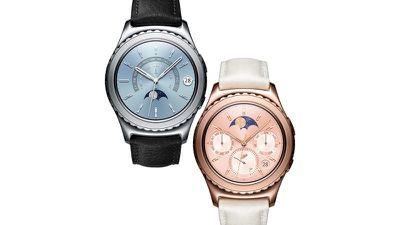 At the current time, the Gear S2, which runs Samsung's Tizen operating system, is compatible only with Samsung smartphones, but that's set to change. Samsung says that later in the year, it will "bring the Gear S2 to iOS," allowing it to compete with the Apple Watch on Apple's own platform. Samsung didn't share additional details on when iOS compatibility might be implemented.

Samsung's Notebook 9 laptops are available in 13.3 and 15-inch sizes, with the smaller of the two weighing in at 1.85 pounds, which is lighter than the Retina MacBook. The larger version weighs 2.84 pounds, and both feature a 1080p display. Max specs for the Notebook 9 laptop includes a Core i7 CPU, 256GB flash storage, and 8GB RAM. Pricing and release info on Samsung's NoteBook 9 laptops and the Galaxy Tab Pro S is not yet available.

polee
Gee I do not find the design of the Samsung watches appealing at all... Sorry just my two cents worth.
Score: 25 Votes (Like | Disagree)

appledefenceforce
The biggest flop in the past few years has been the Samsung smartwatches. They launched it to preempt Apple and yet after all these years they still haven't got it right. And of course the moment Apple launched the Apple Watch they immediately copied the software look.

bwillwall
Samsung always manages to impress me at how ugly their designs are. I always expect them to improve the looks, after all they're good at making functional things with many features and all. But even with their wallpaper photos, their designs are so 90s looking.
Score: 17 Votes (Like | Disagree)

terminator-jq
Unlike some of the people on these forums, I won't let my love for Apple force me to hate Samsung. If I'm being 100% honest, that watch design is very nice. It looks like a high end watch that can go with any outfit rather than the more "techy" look of the square Apple Watch. The only real issue I see is that is runs Tizen. If I could get Watch OS in a watch design like this, I'd be front in line at the Apple Store at release.

It would be really nice if Apple offered a circle version of the Apple Watch 2 (in addition to the regular square version) in order to fit more peoples styles.
Score: 11 Votes (Like | Disagree)

Elbon
In general, I'm a huge Apple fan, but I have to say that I hate the design of the Apple Watch. It just looks like a tiny square iPhone strapped to your wrist. Total nerd-ware. However, if they ever release a round one, I'd definitely consider it.
Score: 10 Votes (Like | Disagree)
Read All Comments