Twitter for Mac today received its most significant upgrade since 2013, introducing a range of new features to bring the Mac app in line with the iOS and web experiences. Twitter for Mac 4.0 includes an updated design with improvements to icons, buttons, and interactions, and it brings a new dark theme to change the background from white to black.

Along with a new look, Twitter for Mac is gaining several new features like inline video playback, GIF support, Group Direct Messages, a mute option, and the ability to quote tweets. All of these features have previously been available within the Twitter iOS app and on the web. Today's update also includes a new Today Center Widget for viewing Twitter highlights in the Apple Notification Center on the Mac. 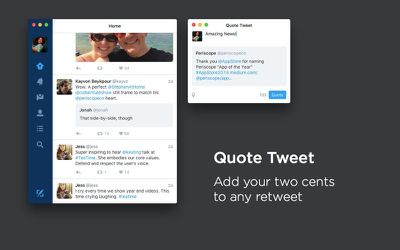 Don't call it a comeback!

Twitter for Mac is getting the update you've been asking for. Now it looks and feels more like the Twitter you carry with you everyday. We've built in some of the most-requested features so your Twitter for Mac experience combines what you love about Twitter with the elegance you expect on a Mac. Here's what we've added:

- Inline video playback - You'll see videos play directly in your feed.
- GIFs support - See animations without leaving your timeline.
- Group Direct Messages - Create and receive private notes with up to 50 people.
- Mute - Silence specific accounts so you no longer see them in your feed.
- Today Center Widget - Get your Twitter Highlights right on your desktop.
- Dark Theme - Now you can see the world in black or white.
- Updated design - Get the latest improvements to icons, buttons, and interactions.
- Quote Tweet - Add your two cents to any Retweet.

The Mac Twitter app received a minor update in August of 2015, but beyond that, the app has gone untouched since 2014. The last major version update ahead of today's refresh was introduced in December of 2013.

Twitter for Mac can be downloaded from the Mac App Store for free. [Direct Link]

DJTaurus
No ios-mac sync and no option add to reading list.....pass.
Score: 6 Votes (Like | Disagree)

You must have a system capable of running the latest OS X in order to install a simple Twitter application.
Score: 4 Votes (Like | Disagree)

Corrode
WHY IS THE SIDEBAR SO FREAKING WIDE??!?