Apple CEO Tim Cook today spent some time at a New York City Apple Store during its Hour of Code event, commenting on what Apple hopes for the future of education and discussing the success of Google's Chromebooks in the education market. 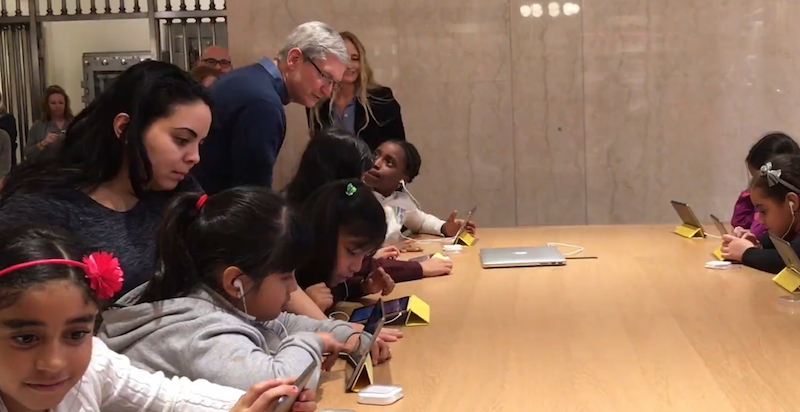 In an interview with BuzzFeed, Cook was asked about Google's Chromebooks overtaking Apple's iPads as the most popular devices in American classrooms. Cook said that Apple wouldn't be following Google's strategy in the education market, calling the lower-priced Chrombooks that have taken over American classrooms "test machines."

BuzzFeed notes that Cook is alluding to one reason Chromebooks have gained in popularity in the education market. As schools turn to computerized testing their need for cheap devices with integrated keyboards and trackpads has increased, rather than tablets that cost more, like Apple's iPads. Apple, says Cook, is not interested in advancing testing.

Instead, Cook said that Apple is interested in "helping students learn and teachers teach, but tests, no." Apple wants to create products "that allow kids to learn how to create and engage on a different level."

In an interview with Mashable at the same event, Cook expounded his thoughts on testing, saying that the classroom of the future is based around problem-solving, creating and learning how to express yourself.

“I’m not a fan of teaching to the test,” said Cook, “I think creativity is so important. Training the mind how to think is so important. Teaching to the test, to me, is too much about memorization. In a word where you’ve got all the information you’ve got right here,” Cook gestured to my iPhone, “your ability to memorize what year a war was won and all this kind of stuff isn’t very relevant.”

The education market has long been important to Apple. More recently, Apple has promoted iPads in the classroom with education profiles showing how some educators are using the device to teach their students. In March, the Cupertino company overhauled its iPad education program to simplify sharing and apps.

Because building bridges have nothing to do with creativity... You wouldn't want people learning better ways to make bridges, better ways to lay them out, better ways to maximize traffic flow. Bridges that automatically de-ice in the winter or that can change the number of lanes that go in each direction depending on the time of day. Cook might have oversimplified his point in his statement, but I think he's on the right track.
Rating: 15 Votes

stewy
Creativity is the future. Because we won't need bridges in the future... Just a bunch of finger paintings and poems.
Rating: 14 Votes

Slix
Tim Cook gets it. Why "learn" to take tests on what they remember when we all have readily available access to devices that can look this information up almost instantly?

I think the idea that creativity is more important that memorization is spot on. We all need less useless facts in our heads and more creativity in our heads.
Rating: 11 Votes

All they have to do is allow multiple accounts on iOS. No reason why only one person can be logged into an app. Enable user accounts and multiple students can share an iPad.


Why bother when you can have 2 or 3 chromebooks for the price of one ipad? The chromebooks are just as capable as learning machines, have keyboards and can use mice if needed. Tim Cook will probably never make an economy ipad or macbook for schools because there's no profit in it. Schools need to economize, and you don't do that by buying the most expensive tablet you can find. It's common sense and pragmatic.
Rating: 9 Votes

MH01
Tim, not every kid that wants an education can afford an apple product. Stop being elitist , and if you truely care about education, create an apple product that competes with the chrome book on pricing ! Otherwise don't rubbish a product as being a test product, and offering kids an education irrespective of the brand on it.
Rating: 8 Votes

We have had the ability to look up dates for hundreds of years. Just because it is easier doesn't mean it isn't a good idea to learn dates. In fact, the best way to learn is by writing things out by rote, by copying, because it helps the brain to remember. It's no good spouting about creativity if there's nothing there to start with.

As to chromebooks: it is a shame that Apple's keyboard for the iPad Pro doesn't have a trackpad. It's also a shame that Apple don't make a cheap iPad. They used to make iPods to cater for all budgets. They should make iPhones and iPads to cater for all budgets, rather than conceding the education market to Google, otherwise all those children will grow up on Android and be lost to Apple.
Rating: 8 Votes


Please tell me you are not really that ignorant. You know damn good and well what he is talking about.
Rating: 8 Votes

abdullamac77
Not sure what Tim is on about. What does tests have to do with the discussion? I have both Macs and Chromebooks in my household and I don't see the Chromebooks anyway less in creativity, problem solving and learning. It's a great machine for learning in fact (can't play Steam games for example). I wish Apple could consider doing something similar in the education space as Chromebooks are far more affordable and does the job..
Rating: 7 Votes

nostaws
I'd rather code with a keyboard and trackpad/mouse. And if we are trying to prepare students for future jobs, we are going to need many more programmers.
Rating: 6 Votes


I had an architecture professor once say... "We should have got you all at kindergarten, now we have to break all the stuff you've been taught, would have been so much better to get you when you were still in the sandbox and playing with blocks". Creativity and individuality is being suppressed in today's education environment-it's all test test test. Tim is right. We all basically have a super computer in our pocket.
Rating: 6 Votes
[ Read All Comments ]