Apple CEO Tim Cook accepted the 2015 Ripple of Hope Award at the Robert F. Kennedy Center for Justice and Human Rights on Tuesday night, and gave a nearly twelve minute speech about the need for social change, reports Bloomberg. 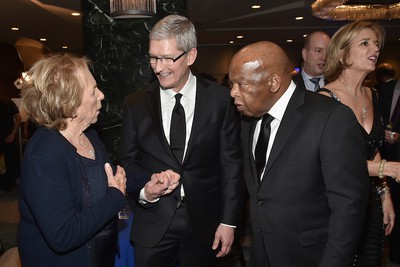 “Today, more than half of the states in this country still don’t offer basic protections to gay or transgender people, leaving millions of people vulnerable to being fired or evicted because of who they are or who they love,” Cook said.

"Today, some in our country would turn away innocent men, women and children seeking refuge,” Cook said, “regardless of how many background checks they may submit to, simply based on where they were born. Victims of war and now victims of fear and misunderstanding."

"Today, too many children are denied access to quality education simply because of the zip code they live in. They begin their lives facing strong headwinds and disadvantage they did nothing to deserve. We could do better, Robert Kennedy would say, and because we can do better, we must act."

Cook offered praise for Robert F. Kennedy and said he has two photographs of him in his office that he looks at each day. "I think about his example, what it means to me as an American, but also more specifically, to my role as Apple CEO."

Read more about Cook's acceptance speech in the full article on Bloomberg.

"Today, some in our country would turn away innocent men, women and children seeking refuge,” Cook said, “regardless of how many background checks they may submit to, simply based on where they were born. Victims of war and now victims of fear and misunderstanding."

Sorry Tim, I don't think there's any misunderstanding with Paris and San Bernardino. There's nothing wrong with turning away people that can't be properly vetted. That doesn't mean banning anyone of a certain religion but pausing immigration from countries where groups like ISIS and Al Qaeda have a foothold...absolutely.
Score: 16 Votes (Like | Disagree)

America would not exist if people had been turned away for whatever reason.

So just let anyone in without proper vetting and if innocent people die blame the NRA. If someone has ties to or sympathies with ISIS we better damn well be turning them away. That's common sense. The feel good gobbledygook Tim Cook is espousing is nonsense.
Score: 10 Votes (Like | Disagree)

Even Longer
Seeing all these comments about Syrian refugees, I can't help but notice one big hypocrisy: US, being one of the key participants in the Syrian crisis from day one, now denies to take part in refugee solution and letting us in Europe deal with them instead.
This is Sparta, I guess...

"Today, some in our country would turn away innocent men, women and children seeking refuge," Cook said, "regardless of how many background checks they may submit to, simply based on where they were born. Victims of war and now victims of fear and misunderstanding."

Sorry Tim, I don't think there's any misunderstanding with Paris and San Bernardino. There's nothing wrong with turning away people that can't be properly vetted. That doesn't mean banning anyone of a certain religion but pausing immigration from countries where groups like ISIS and Al Qaeda have a foothold...absolutely.

When Apple stops hiding hundreds of billions of dollars overseas to avoid U.S. taxes, then he can lecture us about Syrian immigrants. Until then, shut-up Tim, and keep APPL (115.72, 2.13%) on the upswing.
Score: 6 Votes (Like | Disagree)

happydude
well deserved. a compassionate and [given the corporate climate these days] courageous CEO for what he says, does and supports. **queue people saying "yeah, but he didn't do enough" or "he didn't give to my favorite cause so he's terrible" and so on.
Score: 5 Votes (Like | Disagree)

Maybe it's opposite way? How about we separate politic and technology...

People usually only say that when they disagree with the political views of the company they wish to stay out of politics.
Score: 4 Votes (Like | Disagree)
Read All Comments