Rumors about the second-generation Apple Watch started leaking out well before the original Apple Watch launched, as there were health-related features Apple was forced to shelve because of inconsistent performance. Apple experimented with sensors for measuring things like skin conductivity, blood pressure, and blood oxygen, and some of these could make their way into the next-generation device following a year or work on improving the technology. 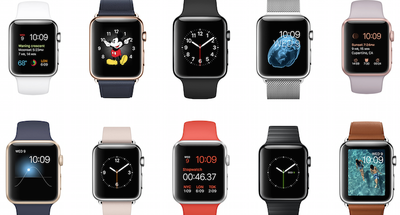 Apple CEO Tim Cook recently said the company's efforts in the health arena would be conservative, because it does not want to deal with the FDA. "We don't want to put the watch through the Food and Drug Administration (FDA) process," he said.

Other features rumored for the next-generation Apple Watch include a front-facing FaceTime camera to allow Apple Watch users to make and receive FaceTime calls and a new Wi-Fi chip that may allow the Apple Watch to do more without a connection to an iPhone.

Today's report on the Apple Watch also says the much-rumored iPhone 6c could also be unveiled at the event, in line with rumors that have pointed towards an early 2016 launch. The iPhone 6c is a next-generation lower-budget 4-inch phone designed to follow in the footsteps of the iPhone 5c. It's rumored to include an aluminum shell, an upgraded A8 or A9 processor, Touch ID and Apple Pay support, and a curved edge cover glass like the iPhone 6.

Patriot24
"Fake, they'll never be on a yearly cycle"
"I told you it would be a yearly cycle"
"Why I'm selling my 1st and getting a 2nd gen watch"
"Why I'm keeping my 1st gen and passing on 2nd gen watch"
"So glad I didn't buy a first gen like all of those other idiots"
"I always wait until the second gen for the real product"
"This is why you don't pay $1,000 for the first gen watch"
"lol people that bought Edition models"
"Make it round"
"Don't make it round"
"Make it thinner"
"Don't make it thinner, just add more battery"
"FaceTime cameras on a watch are stupid"
"Standalone wi-fi or I don't buy"
"Standalone cellular or I don't buy"
"WatchOS 3 will probably kill 1st gen watches to force people to upgrade"
"Steve would've never allowed this"
"Safari will be snappier"
"My wallet is ready"
"Shut up and take my money"

That should get us started.
Score: 30 Votes (Like | Disagree)

redheeler
All those Apple Watch Editions are about to become obsolete!
Score: 24 Votes (Like | Disagree)

I highly, highly double the Apple Watch will get its own GPS. GPS sucks power like crazy and there is little need when most carry their iPhone with them even when working out. There are only a small number of runners that don't carry their phone while they run.

You obviously are not a runner.
Score: 7 Votes (Like | Disagree)

LordQ
No need for iPhone pairing and I'm sold.
Score: 7 Votes (Like | Disagree)
Read All Comments