iPhone Remains Flickr's Most Popular Camera in 2015 Ahead of Canon, Nikon and Samsung 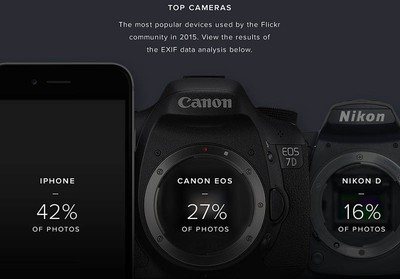 iPhones have been the most popular smartphone cameras on Flickr for several years, which is largely unsurprising since DSLRs and some point-and-shoot cameras cannot be carried around as easily. In January 2015, Apple eclipsed Nikon to become the second most popular camera brand on Flickr.

Skika
The best camera is the one you have with you.
Score: 16 Votes (Like | Disagree)

No it isn’t. It might be the one a friend has that zooms into the mountain a mile into the distance that your iPhone can’t pick up.

Yes my friends usually cary telescopes with them.
Score: 11 Votes (Like | Disagree)

dannyyankou
Apple, with 23 models, is more popular than Samsung, with 276 models.
Score: 7 Votes (Like | Disagree)

Makes me wonder how accurate the results are. What would happen if they compared all iOS cameras to all Android cameras instead of specific brands?

Why would you wonder about the accuracy of the results? They are what they are. The report is about the most popular camera.
Score: 6 Votes (Like | Disagree)

No it isn’t. It might be the one a friend has that zooms into the mountain a mile into the distance that your iPhone can’t pick up.

My Canon DSLR is better than my iPhone and has lenses worthing 5 iPhones.... But most of the time I don't carry my DSLR with me while I'm carrying my iPhone everywhere.

But I know, you HAVE TO downplay Apple, even with a post with so little meaning as this.
Score: 4 Votes (Like | Disagree)

Makes me wonder how accurate the results are. What would happen if they compared all iOS cameras to all Android cameras instead of specific brands?

it is pretty much a no brainer......they are using the info that cameral uploads when it sends to FLICKR......no real chance of messing that up.

Friday June 11, 2021 2:32 pm PDT by Juli Clover
macOS Monterey makes several improvements to password management, positioning iCloud Keychain as an ideal password service to replace third-party services like Lastpass and 1Password. In System Preferences, there's a new "Passwords" section that houses all of your iCloud Keychain logins and passwords so they're easier to get to, edit, and manage. There's a similar Passwords section that's...
Read Full Article • 192 comments